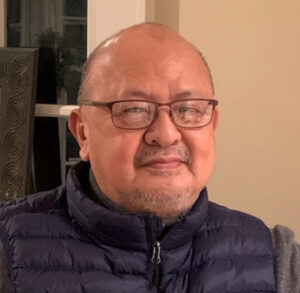 Eustacio “Ter or Terry” Villegas Maloles III, 82, of Manheim Township, died Saturday, November 5, at home, after an illness. He was surrounded by his four daughters.

A hotel executive, Ter retired as resident manager of Ambassador Hotel, Manila, Philippines, and emigrated to the United States in 2000 to be with his daughters and his newly born grandchildren.

He took up residence in Lancaster, where he adjusted easily to a slower pace of life. For three years he was a crossing guard at George Washington Elementary School. He then worked 16 years in the deli department of Stauffer’s of Kissel Hill on Rohrerstown Road and Oregon Pike, retiring in 2019.  Ter was a people person who found success and fulfillment in service-oriented careers. Asked by a daughter how a former hotel executive was able to transition to a career of slicing deli meats, Ter said he enjoyed serving his customers, many of whom had become “friends.”

Ter was educated by Jesuits from grade school through college. He graduated in 1960 with a B.A. in economics from the Ateneo de Manila. He was a longstanding member of the Knights of Columbus. In Lancaster, he belonged to St. Anthony of Padua Parish.

Ter was an avid reader of thrillers and espionage novels. He owned a vast collection of bestsellers, including all the books of Robert Ludlum. He loved going to the movies, and was a fan of Jackie Chan and kung fu. As a boy he spent Saturdays with his father going from one movie house to another. He continued the practice as often as was possible with his daughters and then with his grandchildren. He enjoyed sports, most especially basketball.  In his younger years, he was a member of a bowling league.

Born in Manila, Philippines, Ter was the oldest son of Eustacio Maloles II and Soledad Villegas. He is survived by four daughters, Sofia “Pia” Maloles of Manheim Township; Pola Maloles Brown of West Hollywood and her partner, Mary McInerney of New York City; Rachel “Maia” Maloles-Ietta, married to Dr. Michael Ietta of Ho-Ho-Kus, N.J., and Shelter Island, N.Y.; and Nedda Maloles of Lancaster. He is also survived by three grandchildren, Quinn Maloles-Rutter of Lancaster, and Alessandra “Ala” Ietta and Michael Gabriel Ietta, both of Ho-Ho-Kus and Shelter Island; a sister, Myrna Belleza of Manila; his former spouse, Marichelle Roque-Lutz of New Holland; three nieces, Roselle Andaya, Nadia Bite and Mia Belleza, and two nephews, Pierre and Carlos Belleza, all of Manila. He was preceded in death by a brother, Antonio “Noni” Maloles.