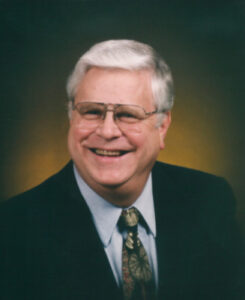 Dr. Paul Henry Belser, of Lancaster, passed away peacefully at the Mennonite Home in Lancaster on January 15th, 2023 after a prolonged illness. He was 89 years of age. Born in Lancaster in 1933, the son of the late Paul and Elva Mae (Freymeyer) Belser, he was raised in Elizabethtown with his older sister, Janet, and younger brother Bob. Music, education, and athletics were constant passions in the family. Excelling in trumpet at an early age Paul’s skills were well recognized in the region and he began playing with both the Harrisburg Symphony and Lancaster Symphony Orchestra while still attending Elizabethtown H.S. He was soon awarded the principal chair with the LSO, a position he held continuously for more than 55 years. He was honored by the LSO with their “Symphony Salutes” on June 22nd, 2006.

It was in the 7th grade that Paul first laid eyes upon the love of his life, Florence Yvonne Nisley, from Hummelstown. They remained sweethearts without interruption from then on and married in 1955. Paul attended Franklin and Marshall College and earned his D.D.S at Temple Dental School in Philadelphia (’56). During 2 years of service as a dentist in the U.S. Air Force in Myrtle Beach, S.C., daughter Suzanne was born. They then settled back in Lancaster where Paul opened his dental practice in 1958. Son Paul was born in Lancaster that same year. Brother Bob joined the practice (also a Temple Dental School graduate) in 1965 and the two worked together for over 35 years. Both served terms as presidents of the Lancaster Dental Society.

In addition to the Lancaster Symphony Orchestra Paul played frequently with the pit orchestras for the Lancaster Opera Workshop, many musical productions at the Fulton Theatre, many church services in churches throughout the Lancaster area, and was a member of the Susquehanna Brass Quintet for more than 20 years. In 2004, Paul, along with Rick Staherski, and Walter Blackburn founded the Lancaster British Brass Band, an ensemble of talented brass and percussion players primarily from the Lancaster-Lebanon-Reading region that continues to thrill audiences in churches, retirement community centers, and in concert halls. In 2012 in honor of Paul’s 80th birthday the Belser family commissioned Philip Sparke, a world-renowned British composer of works for brass band, to compose a piece for the LBBB (with optional men’s chorus) based on Charles Wesley’s “Lo! He Comes with Clouds Descending” (tune- “Helmsley”). The work was premiered at the First United Methodist Church, Lancaster on May 10th, 2014 by the LBBB and the Wesley Singers. Philip Sparke was here to conduct.

A memorial service and reception will be held Saturday, February 4th, 2023 at 2:00 PM at First United Methodist Church, 29 E Walnut St, Lancaster, PA 17602. The service will also be live streamed at:  https://my.gather.app/remember/dr-paul-belser

In lieu of flowers, memorial contributions may be made in Paul’s memory to First United Methodist Church at the address listed above.  To leave an online condolence for the family, please visit: www.DeBordSnyder.com