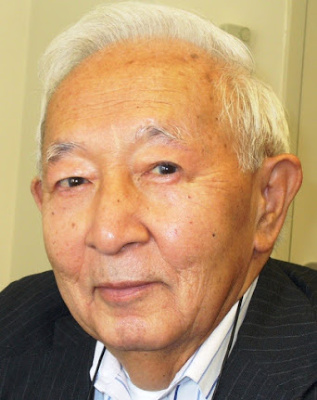 Born in Tacoma, WA, on June 15, 1923, Bill was the son of the late Hideichi and Asako Takahashi Uyeda. He was the husband of Kazuko T. Uyeda for 73 years. He is survived, in addition to his wife, by two sons, Allen Bruce, affianced to Eimi Zecha, of Honolulu, HI, and William Spencer, husband of Marcia B. Burkey, and two granddaughters of Clyde Hill, WA, and a daughter, Leslie Joyce, wife of Arthur Jackson, of West Newton, MA. A daughter, Elizabeth Naomi, predeceased her father, as did two of his sisters.

Bill served in the U.S. Armed Forces during WWII as an infantry and intelligence officer, primarily in the postwar occupation of Japan. He graduated from the Massachusetts Institute of Technology with a degree in Physics, and went on to join RCA in Lancaster. At RCA Bill participated in the development and manufacture of color television picture tubes. He retired after 34 years as an engineering manager.

Always active in community and school activities, Bill expanded this priority in retirement to include bringing visibility to civil rights issues. He shared his story as a Japanese American interned with his family at the start of WWII, in the hope of helping others avoid similar injustices. He made over fifty appearances around South Central PA to give his “Ascent From Adversity”presentation.

Bill also taught English as a second language, served as a substitute teacher in mathematics and sciences in middle and secondary schools in Lancaster County, and helped prepare people for their GED for IU13 and the Literacy Council. He served a two-year term as the Resident Council President at Homestead Village, where he lived for the past 13 years and came to be known for daily walks around the Mews.

Bill served as a Board Chairman, Deacon, Elder, and Sunday School teacher at Calvary Church in Lancaster. He enjoyed watercoloring, traveling, writing poetry, violin, classical music, tennis, woodworking, and gardening. His wry sense of humor brought lightness and laughter to many.

Bill’s oral history interview about his wartime experiences can be accessed at the University of Southern California’s Go For Broke National Education Center website by entering “Yoneichi Uyeda” in search.

A private burial service was held at Conestoga Memorial Gardens.

Offer Condolence for the family of Yoneichi “Bill” Uyeda