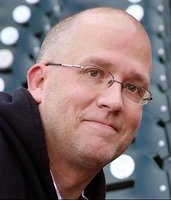 Woody Woodward, 41, of Elizabethtown, PA died on Saturday, May 23, 2015 at Lancaster General Hospital after an amazingly courageous battle against cancer. His fight to live has been an inspiration to everyone he came in contact with.

Born in Waterbury, CT, he was the son of Geri DeBaro Woodward, and the late Wilfred R. Woodward, III. He was the beloved husband of Gretchen Lichty Woodward. He adored her and said it loudly, proudly, and often.

Woody’s life can be best described as “a life of service.” Every aspect of his life, from work to hobbies to relationships, centered around the needs of others. Throughout his cancer treatments, he maintained a positive attitude and took a genuine interest in his friends’ lives. His selfless spirit is admirable to all who knew him.

At the age of 15, Woody became a Jr. Firefighter at Lafayette Volunteer Fire Company. He has served as a volunteer in one way or another with various fire departments from Lancaster County to Allison Hill in Harrisburg for over 25 years. He was a member of the Rohrerstown Volunteer Fire Company for 15 years and was employed as a 911 dispatcher for Lancaster County for 19 ½ years.

He always had a love of photography. In 2010, after his cancer diagnosis, Woody chose to no longer ride the fire trucks. His role changed to fire photographer and until his death, was the official photographer for Rohrerstown FD and Manheim Township Fire and Rescue.

In addition to his wife and mother, he is survived by his son, Wyatt C. Woodward, his brother, Rodney M. Woodward, and his nephew, Evan R. Woodward.

Relatives and friends are respectfully invited to attend a Memorial Gathering at Mellinger Mennonite Church, 1916 Lincoln Highway East, Lancaster, PA, 17602 on Wed. May 27, from 1:00-4:00 PM.

A Fireman’s Funeral Ceremony will be conducted at 4:15 P.M. at Mellinger Mennonite Cemetery.

In lieu of flowers, the family has requested gifts be made in Woody Woodward’s memory to support the Thyroid Cancer Research Program at Penn Medicine.  Checks can be made payable to “Trustees of the University of Pennsylvania” and sent to: Katie Dewees Detzel, Penn Medicine Development Office, 3535 Market St, Suite 750, Philadelphia, PA  19104.

After the graveside service, there will be public receptions at the Neffsville and Lafayette Fire Companies.

Offer Condolence for the family of Woody Woodward