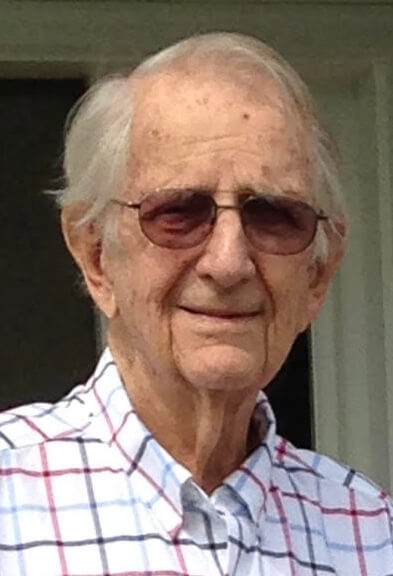 *Please note a change to the service details below.

William James (Bill) Van Pelt, 97, entered into Eternal Rest on Monday, September 28, 2020 at his home in Homestead Village surrounded by his family.  He was the husband of Sally Henry Van Pelt with whom he celebrated 72 years of married life.

Born, raised and educated in Red Bank, New Jersey, Bill was the son of the late James and Maude Van Brunt Van Pelt. Following high school graduation from Red Bank High School, Bill entered The Pennsylvania State College (now University) to study chemical engineering. Shortly thereafter, he entered military service with the U.S. Army Corps of Engineers. Upon graduation from Officer Candidate School at Ft. Belvoir, VA, he joined an engineer regiment in the European Theater of Operations. He was transferred later to the Asian Pacific Theater in the Philippines and following VJ Day served in the Army of Occupation of Japan. He left the Army with the rank of Captain in 1946.

Following WWII, Bill returned to Penn State and obtained his B.S. degree in Chemistry in June, 1948. During his campus career, he was a member of Beta Theta Pi fraternity, Blue Key Society and the varsity track team. Bill met the love of his life, Sally Elizabeth Henry, while a student at Penn State and they were married in June, 1948.

Upon graduation, Bill began employment with Armstrong Cork Company (now Armstrong World Industries) as a research chemist at the Research and Development Laboratories. Subsequent advances led him to Human Resources from which he retired after 40 years of service in 1989 as General Manager of Salaried Personnel Services. His extensive travel recruiting talented young people for Armstrong led him to college and university campuses all over the United States. Bill actively led the phase-in of the Equal Employment Opportunity Act at Armstrong in the mid 1960’s and in doing so, forged great friendships with several memorable presidents of HBCUs.

Bill was a former member of the Lancaster Country Club, the Hamilton Club and the Lancaster Pirates. In his later years he enjoyed visiting local high school civics classes where he recounted stories about WWII. Additionally, he enjoyed watching Penn State football, Phillies baseball and westerns, playing bridge, working in the yard and spending summers with family and friends in his Ocean City, NJ home.

The family would like to express their gratitude to the caregivers and nurses from Grane Hospice, Central Penn Nursing Care, and Homestead Village, longtime housekeeper Mildred McElhenney and Dr. Owen Fox.

The memorial service planned for William J. Van Pelt on November 14, 2020, is being postponed to a later date following the resolution of the pandemic.  Please look for an update on www.DeBordSnyder.com in the future for the rescheduled date and time.

Interment will be at Fairview Cemetery in Middletown (Red Bank), NJ at the family’s convenience.

In lieu of flowers, contributions may be made in Bill’s memory to the First Presbyterian Church of Lancaster or the Homestead Village Endowment Fund at Homestead Village, Inc., The Office of the President, 1800 Village Circle, Lancaster, PA 17603.