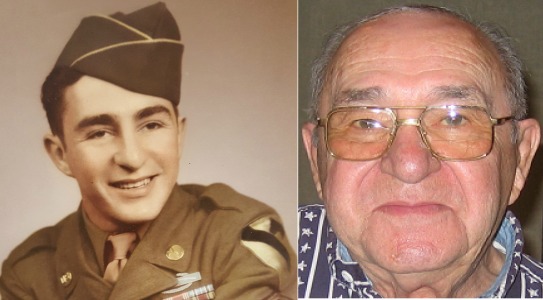 Bill Cifuni was born in Philadelphia, PA in 1924 to parents Henry Joseph Cifuni and Rose Lucy (Biando) Cifuni, both of whom were second generation Italians. He had an older brother, Nick and a younger sister, Rachel, both deceased. They lived in south Philly until Bill’s Dad found a permanent job in Lancaster County in 1932 (remember, this was during the Depression) and the family moved to their new home in Lancaster. They lived at various addresses until finding a nice home on Fruitville Pike.
Bill graduated from Manheim Township High School and then enlisted in the U.S. Army, 1st Cavalry, in 1942. He served in the Pacific Theatre during World War II and was wounded during combat. He is a recipient of the Purple Heart and many other honors. He achieved the rank of Tech Sergeant by the time of his discharge in 1945.
Back in Lancaster, Bill took classes and became a licensed beautician. This and a few other jobs kept him busy until he found the two loves of his life – his wife Lois Eleanor Schrader, whom he married in 1949, and his job at radio station WLAN. He started as a salesman at the station and rose to the title of Business Manager. He was a common sight in downtown Lancaster as he walked from business to business selling air time. His many friendships were developed during this period of his life. He reluctantly retired at the age of 70.
He served as past President in the American Businessmen’s Club (ABC or AMBUCs) and achieved a 50 year perfect attendance record at the club’s meetings. He was a member of the Lancaster Italian-American Club, until the club was discontinued. He was an avid bowler, participating on two teams for over 50 years. Bill loved to go with his wife, Lois, to Atlantic City to play Blackjack, to the horse races at Penn National, or to bingo games after his retirement. He was teased mercilessly about how lucky he was at games of chance, bowling poker games, and football pools. One time someone asked Bill if he could switch his 50-50 ticket with Bill in the hopes that his luck would improve and he would be the winner of the pot instead of Bill. Bill was generous and made the switch, but of course, Bill still won the pool.
Bill was the father of two sons, Henry Joseph and William Frank (Bill) II, and his favorite daughter-in-law, Valerie (Henderson), all of Lancaster. His greatest loss was the passing of his wife, Lois, in 2003 after 54 years of marriage. Other survivors include nieces and nephews.
As Bill slowed down over the last few years, he kept his sense of humor, love of good home cooked food, many times prepared by one of his two sons, and his indomitable spirit that never gave up. He will be missed by many.
Visitation will be Monday, April 3, 2017 at DeBord Snyder Funeral Home & Crematory 141 E. Orange Street Lancaster, PA 17602 from 6-8 pm. Interment will be private at Indiantown Gap National Cemetery at the convenience of the family.

Offer Condolence for the family of William Frank Cifuni