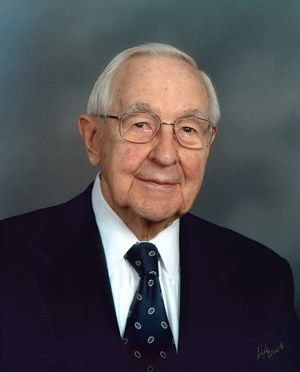 He was born September 18, 1916 in Buffalo, New York, the son of Enos Herr and Blanche Glasgow Krantz.  He was a resident of Lancaster all of his adult life, residing at 621 North School Lane for forty-four years prior to moving to Willow Valley Retirement Community in 1995.

He was a 1933 graduate of Manheim Township High School and a 1937 graduate of Franklin & Marshall College.

He retired in 1981 as Senior Vice President of Penn Dairies, Inc.  He continued to serve as a member of the Board of Directors and the Executive Committee of that company until it was sold in 1990.

Over a period of more than seventy years, he was active in many businesses and civic organizations in the Lancaster area.  At twenty-one years of age in 1937, he joined the very active Lancaster Junior Chamber of Commerce.  In 1992, on the completion of his term as Chairman of the Lancaster Airport Authority, he was cited by the Lancaster New Era with the Red Rose Award for his “long career devoted to civic and community service.”

He long had an interest in aviation and was a private pilot with airplane and hot air balloon ratings.  He served as chairman of the Lancaster Airport Authority for four years.  He was a member of the Anciente and Secret Order of Quiet Birdmen and a past president of the Lancaster Aero Club.  He was the author of “A History of Aeronautics in Lancaster County Pennsylvania.”

He was a past president of the Lancaster Junior Chamber of Commerce (Jaycees), the Optimist Club of Lancaster and Lancaster Chapter, Institute of Management Accountants.  He was a charter member and past president of the Central Pennsylvania Chapter of Financial Executives International, having previously been a member of the Philadelphia Chapter.  He served as a member of Pennsylvania Governor William Scranton’s Tax Administration Committee.  In retirement, he also served as chairman of the Lancaster Chapter of Service Corps of Retired Executives (SCORE).

Krantz was an Honorary Member of the Hamilton Club of Lancaster, having been a member for over fifty years, and also served as a director and Treasurer of that organization.

He was a long time member, Trustee Emeritus, and a Fellow of the Lancaster County Historical Society (Lancaster History.org).

Over the years, he served as officer or director of Demuth Foundation, Alumni Council of Franklin and Marshall College, Hospice of Lancaster County, Lancaster Y.M.C.A., Landis Valley Museum Associates, Parish Resource Center, and United Way.  He was also a director and Treasurer of the Lancaster Chamber of Commerce and Industry.

He was a long time member of the First United Methodist Church of Lancaster, where he served as a Trustee and in various other capacities.

He was a member of Lodge No. 476, F. & A M, and the Lancaster County Shrine Club.  A member of the National Association of Watch and Clock Collectors, he formerly was a volunteer guide at the National Clock Museum in Columbia.

He was also a member of the Cliosophic Society, and the Pirates of Lancaster.

Relatives and friends are respectfully invited to attend a Memorial Service in the Thomas Auditorium at Willow Valley Lakes Manor, 300 Willow Valley Lakes Dr., Willow St., PA, on Saturday, December 5, 2015 at 11:00 AM with the Rev. Joseph F. DiPaolo and Rev. Dr. Kent E.Kroehler officiating.  A visitation will be held in the Thomas Auditorium on Saturday, December 5th from 10:00 to 11:00 AM.  Private interment will be held at the convenience of the family in New Providence Mennonite Cemetery.  In lieu of flowers, contributions in Bill’s memory may be sent to Hospice & Community Care, 685 Good Dr., P.O. Box 4125, Lancaster, PA 17604-4125.

Offer Condolence for the family of William E. Krantz