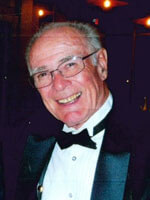 Born in Brooklyn, NY, he was the younger of two sons of the late Michael and Mary Christine (Tobin) Bourke.  He was the beloved husband of Donna M. (McCampbell) Bourke for over 43 years.  Bill is survived by a daughter Colleen (Bourke) Morea and her husband Joseph and two sons William and Kevin Bourke.  He was the grandfather of Brian and Christopher Morea.  Bill was preceded in death by his parents and brother, John Bourke, husband of Dixie.

He proudly served his country from 1956-1958 as an Airman in the U.S. Navy Reserves stationed in Saufley Field, Pensacola, FL.

After retirement, Bill and Donna moved to Long Pond, PA, in the Poconos. There he became Chairman of the Monroe County Municipal Waste Management, was elected to the position of Supervisor of Tunkhannock Township in 2000-2006 and was also President of Pocono Eco/Industrial Park Inc.

Moving to Homestead Retirement Village in 2006 provided many opportunities for Bill to volunteer his time and talents to help others. Because of Bill’s love of golf, he established the “Homestead Village Golf Group”, and also played golf with the “Parsormore Golf Group” of Lancaster County.  Bill was an active contributor to the “Activities Committee”, and also served as Vice President of the Homestead Auxiliary for 2 years, and became President of the Auxiliary from 2011-2012.

Relatives and friends are invited to attend a Celebration of Bill’s Life which will be held on Saturday September 9th, 2017 at 2 pm at the Bachman Center of Homestead Village, 633 Community Way, Lancaster, PA 17603.  A private interment will be held in the Memorial Garden at The First Presbyterian Church downtown Lancaster.

Offer Condolence for the family of William Bourke