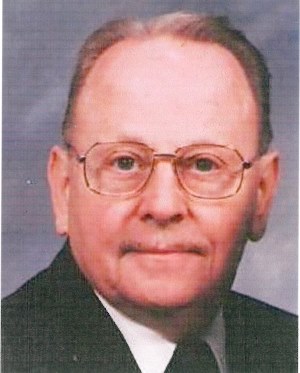 William “Bill” Dodd Elliot, 90, of Lancaster, passed away on Friday, May 15, 2015 at Brethren Village Retirement Community.  He was the loving husband of Ina (Church) Elliot.  Born in the Bronx, NY, he was the son of the late John and Catherine (Wilson) Elliot.

He proudly served as Staff Sergeant in the United States Army Infantry (Trailblazers) while stationed in Europe during WWII.  He spent his career as a carpenter for the New York City Board of Education.

After retirement he enjoyed golf, square dancing, boating and traveling. One of his greatest joys was spending time with his family.  He was proud of his Scottish heritage as a descendant of The Elliot Clan.

In addition to his wife Ina, he is survived by two daughters; Barbara A. Elliot, Ph.D. of Wayne, PA and Elaine Post (Scott) of Trinity, FL; and three grandchildren, Rebecca, Adam (Nicole) and Jennifer (David).  He was predeceased by brother George W. Elliot and sister Doris Nolan.

Per Bill’s wishes, there will be no formal service.

Contributions may be made in his memory to the Brethren Village Benevolent Fund, 3001 Lititz Pike, Lancaster, PA 17606.

Offer Condolence for the family of William “Bill” Dodd Elliot