You are here: Home / Obituaries / Willard Hoyt “Will” Blanchard 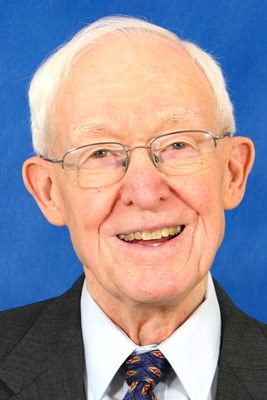 Willard Hoyt “Will” Blanchard, 86, a resident of Willow Valley Communities in Lancaster, PA and formerly of Vienna and Fairfax, VA, passed away peacefully surrounded by his family on Monday, June 3, 2019 in Lancaster General Hospital.

Will was born December 15, 1932 in Cassopolis, MI, the oldest child of Marvin C. and Lucy E. (née O’Beirne) Blanchard. He grew up in the small town of Edwardsburg, MI, but spent ten summers working on a relative’s dairy farm. Will graduated as valedictorian from Edwardsburg High School in 1951.

Will was a graduate of Michigan State University, where he received his BS and MS degrees in agricultural economics. He served two years in the U.S. Army as an infantry officer, with a tour in Korea. Will was married August 9, 1958 in Edwardsburg to Sandra Kay Click. In 1960, they moved to the Washington, DC area.

Will worked for the U.S. Department of Agriculture for 33 years before retiring in 1994 as Director of the Dairy Division of the Agricultural Marketing Service. During his years in the department, he was involved with the development and administration of milk marketing orders, which are pricing programs used to stabilize marketing conditions for dairy farmers. Other activities during his career included working on dairy legislation and overseeing milk promotion and inspection and grading of dairy products.

After retirement, Will volunteered as a docent at Frying Pan Farm Park, a Fairfax County-owned 1920-1950s-era working demonstration dairy farm. He donated over 100 family-owned woodworking tools used in that time period, which are featured in a newly constructed woodshop.

Will was recognized by the American Red Cross for being a dedicated blood donor. He donated more than 22 gallons of blood over the course of his lifetime.

Will and Sandy enjoyed traveling to all 50 states, 16 European countries, and China. Will also enjoyed reading and classical music, including spending countless hours attending the many concerts of his musical family. His greatest joy was spending time with his family.

In addition to being survived by Sandy, his loving wife of nearly 61 years, Will is survived by three children, Linda Douglas, Tom (Karen) Blanchard, and Ann (Jason) Lewis; seven grandchildren, Laurie (John), John-David (Maria), Justin, Amelia, Caroline, Kate and Charlie; and two great-granddaughters. A son, Robert, a sister, Alice, and a brother, Burton, preceded him in death.

Offer Condolence for the family of Willard Hoyt “Will” Blanchard