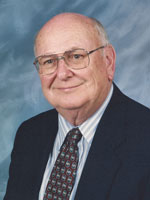 W. Donald Charles, 81, formerly of East Petersburg, passed away Monday, November 14, 2011 at the Heart of Lancaster Regional Medical Center. Born in East Petersburg, he was the son of the late J. Wilmer Charles and the late Miriam Hollinger Charles Weaver. He was married to the late Anna Stadel Charles who died in 2000.

Don worked as a painter for several local contractors, and then for Franklin and Marshall College from where he retired in 1991. After retiring, Don and his wife worked with their son at the former Chefscargot Café and Catering.

He served in the U. S. Army during the Korean Conflict. He was an avid golfer and had been active in numerous groups in the East Petersburg community. More recently he was active in the Wesley Singers, and the Men’s Chorus at Brethren Village, where he resided. He was a member of St. Matthew Evangelical Lutheran Church, Lancaster and was active in the church choir.

Funeral Services will be held from St. Matthew Evangelical Lutheran Church 700 Pleasure Rd. Lancaster, Pa 17601 on Friday, November 18, 2011 at 2 PM with interment following in Zion Lutheran Church Cemetery in East Petersburg. Friends may call at the Richard A. Sheetz Funeral Home 2024 Marietta Ave. Lancaster on Thursday evening from 6 to 8 PM and from 1 to 2 PM at the church on Friday. In lieu of flowers, contributions may be sent to the St. Matthew Evangelical Lutheran Church Memorial Fund or to the Brethren Village Benevolent Fund P.O. Box 5093 Lancaster, PA 17606.

Offer Condolence for the family of W. Donald Charles