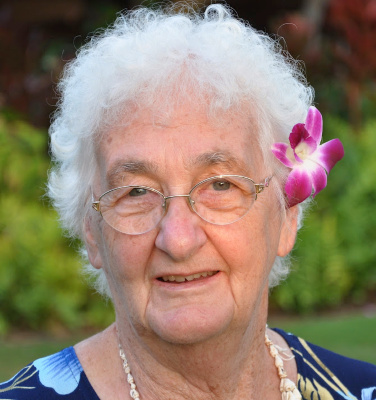 Virginia O. Johnson, 90, of Lancaster, passed away on March 27, 2020 at Calvary Fellowship Homes. She was the loving wife of the late William W. Johnson, who served his country as a Naval Submariner. Born in Keene, NY, she was the daughter of the late John W. and Frieda A. (Young) Otis.

After graduating from Hartford Public High School, she attended the Cambridge Secretarial School after which she worked in the insurance industry. It was during this time she met the love of her life on a blind date. ‘Ginny’ and ‘Willy’ married December 15, 1951, in New Hyde Park, NY. As a Navy family they moved several times over the ensuing years residing in Connecticut, Virginia, and South Carolina. Virginia dedicated her life to God, family and Country. As a Navy wife she was faithful in raising their four sons while William was frequently deployed for months on end throughout the Cold War. At home she provided love and discipline while always teaching her children to love, forgive, and get along with others.

Always an active member in church, Virginia loved music, and sang in the choir and around the home. She taught Sunday school, Awana clubs, and VBS, in addition to serving on the church education board and as a Deaconess. Virginia and William would often reach out to sailors stationed at the Groton Submarine Base, inviting them over to share with the family dinner, giving the sailors a ‘little home’ away from home. They often worked with Navy and Coast Guard sailors at the New London Christian Servicemen’s Center in addition to many years serving others as members at Groton Heights Baptist Church located in Connecticut.

Virginia enjoyed traveling – always longing to see our beautiful nation. She possessed a pioneering spirit being a descendant of John Howland who first came to America on the Mayflower in 1620 AD. William & Virginia and sons would often travel together, driving where they went. The highlight of her travels was a cross country trip driving from coast to coast during the summer of 1980 following the eruption of Mt. St. Helens. After the passing of her dearly loved ‘Willy’ in 2006, Virginia embarked on two longed for destinations that the two of them were not able to take together. She traveled to Hawaii, as well as Alaska, with her sons and daughters-in-law.

Virginia resided with her son David and his family for many years until she suffered a stroke, leaving her partially paralyzed, requiring skilled nursing care. She continued to experience mini strokes throughout her remaining years. No matter her plight she remained a source of caring, warmth, laughter, and encouragement unto all who she came into contact. Residing at Calvary Homes in Lancaster, PA, she always longed to eat lunch in the Café daily, spending two hours or more socializing and eating with friends. Being bound to a wheelchair, she would seek to visit others and engage them in conversation. Virginia maintained a ministry of daily praying for others, lifting them up to God interceding for them. We were the recipients of many blessings from our precious Lord due to her prayers.

And yet our mother had reserved her greatest lessons for the last portion of her life. Lessons of enduring patience, dignity, selflessness, dependence on God. Her strong will to live was mixed with a deep loneliness, along with her desire to see her Lord and Saviour . . .and to be reunited with her ‘Willy’.
Virginia and William were faithfully married for over 54 years raising their four sons to also love God & Country, as well as others. All four sons attended Lancaster Bible College – of which three continued on to complete seminary becoming pastors, and one son into pharmaceutical research and a ministry of gospel singing.

She is survived by her four sons; Stephen Johnson (Denise) of Huntington Beach, CA, Michael Johnson (Shirley) of Fall River, MA, Phillip Johnson (Joan) of North Stonington, CT, David Johnson (Lora) of Manheim, PA. Also surviving, are sixteen grandchildren and nine great-grandchildren. Services will be private at the convenience of the family with interment in Indiantown Gap National Cemetery.

Offer Condolence for the family of Virginia O. Johnson