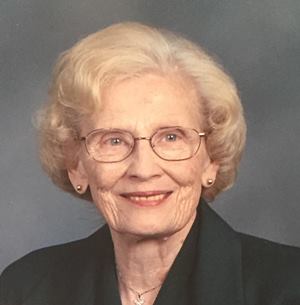 Born in 1929, Virginia (“Ginny”) was the eldest daughter of Creston and Hope Shreve Miller.  Ginny spent her entire life in Lancaster and began playing piano at an early age.  While attending McCaskey High School (class of ’46) she studied piano with Kathryn Grube.  After graduating from McCaskey, she commuted to and attended Philadelphia Conservatory of Music where she studied under Vincent Persichetti, a renowned contemporary American composer and virtuoso pianist.

Ginny became an accomplished classical pianist and teacher.  She was an incredible sight reader, and was able to learn new music very quickly.  During her peak teaching years, she had over 30 students at all levels of expertise.  Several of her students went on to careers in music; one (Vince Dicola) became a very successful film scorer and composer (among his work is the music to “Rocky IV”), another (Roger Vine) toured Europe playing organ in major European cathedrals.

Ginny volunteered her time and sang at the Fulton Opera House in several Kiwanis musical productions.  Later in her life, she studied classical voice and became a soprano soloist at First United Methodist Church services in Lancaster and other local venues.  She also was an avid reader and bridge player, most notably with the infamous “BBSS” bridge club (Bare, Boyer, Snyder, and Sload).

Ginny was married for 61 years to Robert Boyer, a former Lancaster County commissioner who passed away in 2012. Ginny is survived by her sister Marilyn May Miller Bare (wife of F. Robert Bare); cousin Joanne Shreve Kuster; daughter Leigh Boyer; son Robert Boyer (husband of Carol Hansen); grandchildren Canaan Boyer and Dexter Pope, and numerous nieces and nephews.  She was a lifelong member of the First United Methodist Church in Lancaster.

By request of the family, please dress casually.  Any donations in Ginny’s honor should be made to the Benevolent Care Fund, Moravian Manor (at the address listed above) or Masonic Village Hospice, 1 Masonic Drive, Elizabethtown, PA 17022

Offer Condolence for the family of Virginia Boyer