You are here: Home / Obituaries / Violet A. Dull 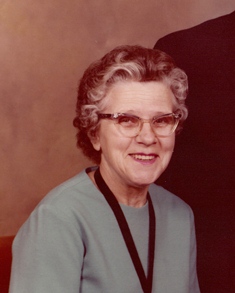 Violet A. “Mom” Dull, 93, of Lititz, died Sunday, December 4, 2011 at Hospice of Lancaster County in Mount Joy.
She was the wife of the late Clarence L. Dull who died in 1990. Born in Pottstown, PA she was the daughter of the late John and Elizabeth Trimble Lesher.
Violet was a homemaker who enjoyed bowling and vacations in Wildwood, NJ. She was a member of the Redeemer Lutheran Church.
Surviving is a son, Richard L. husband of Jean Dull of New Providence; a daughter, Shirley A. wife of Robert Stark of Wellsboro; a daughter-in-law, Sandra Dull of Lancaster; 11 grandchildren, four great grandchildren; one great great grandchild; a sister, Leta Barton of Lancaster, and a brother, Roy Lesher of NC. She was preceded in death by a son Donald Dull.
A Memorial Service will be held on Tuesday, December 27, 2011 at 10:30 A.M. at the Kearney A. Snyder Funeral Home, 141 E. Orange St., Lancaster, PA. Friends may greet the family on Tuesday, December 27, 2011 from 9:30 A.M. until the time of the service. Contributions in her memory may be sent to Hospice of Lancaster County, 685 Good Drive, P.O. Box 4125, Lancaster, PA 17604-4125.

Offer Condolence for the family of Violet A. Dull