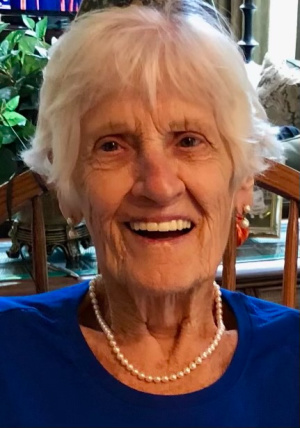 Theresa Munnelly, 92, passed away peacefully in her sleep on Friday, April 16, 2021 at the Willow Valley Community in Lancaster Pennsylvania.  She was the loving wife of John Munnelly, who pre-deceased her in 2011.  The couple enjoyed 60 years of marriage.

Terri was born in Brooklyn, New York on October 21, 1928 to Irish immigrants John & Mary Bracken.  She had three brothers and four sisters.  Terri lived in Colorado, Texas & Alabama during her husband’s time in the Air Force, but returned to New York State in 1953 where she lived and raised a family for 40 years.  She retired to Ocean Pines, Maryland in 1993 and eventually located to Willow Valley.

Terri loved bingo, the beach, mahjongg and played tennis and skied into her 70s.  Terri was an avid reader and held a number of part-time jobs over the years but her true calling was as a full time Mother and Grandmother.  She is survived by her children, John Munnelly and wife Anne, Ken Munnelly and wife Jean Marie Woodard, Terri Humes and husband Jeff, Joseph Munnelly and wife Kristen; eleven grandchildren and nine great grandchildren.

Due to covid, the family will hold a small private service in Saugerties, New York, where Terri will be reunited with her beloved husband.  Contributions in Terri’s name may be made to the Christopher & Dana Reeve Foundation, (christopherreeve.org), 636 Morris Turnpike Suite 3A Short Hills, New Jersey 07078.

Offer Condolence for the family of Theresa Munnelly