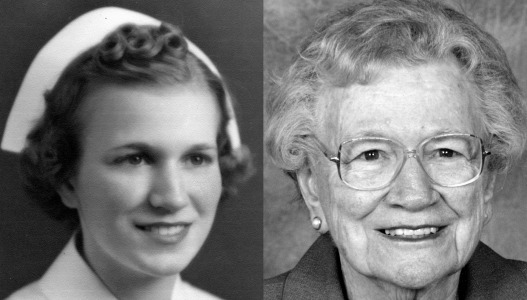 Thelora (Peddie) Bliss, 99, of Lancaster, PA, passed away on October 19th, 2017, at Homestead Village, where she resided since 1991. She was the dear and loving wife of the late John W. Bliss of Valley City, ND.

Thelora was born in Bethlehem, PA, to Charles and Anna Dullenkopf. After graduating from Liberty High School in Bethlehem Peddie went on to become a Registered Nurse. She received her training at the Allentown Hospital School of Nursing graduating in 1939.

She married John Bliss, a Lehigh University Mechanical Engineer, in 1939. In 1949, after giving birth to three children, Peddie and John and children moved to Concepcion, Chile. John Bliss worked at the Compania de Acero del Pacifico while Peddie volunteered as a surgical nurse at the local hospital. She was instrumental in supporting a community orphanage in Concepcion. She served at the Union Protestant Church with many European and American families. She immersed herself in the cultures of Chile and spoke and wrote fluent Spanish.

In 1956 the family returned to the US and eventually settled in Westfield, NJ. When the earthquakes of May, 1960 devastated Concepcion and its peoples, Peddie raised the plea for donations and clothing. For a month her home in Westfield became a Red Cross warehouse for donations to that international rescue effort. She was a per diem nurse at Overlook Hospital in Summit, NJ, to support college tuitions for her three children.

Just prior to retirement Peddie and John moved to Oceanport, NJ where they enjoyed their three children and their spouses, and their twelve grandchildren. Peddie became an expert at steaming crabs caught by the grandchildren under their dock. They moved to Homestead Village, due to John’s failing health, and they joined the Church of the Apostles. Peddie’s hobbies included sewing and needlework, tole painting, and basket making; and always she was the observant and helpful nurse.

Thelora Dullenkopf Bliss, Peddie, is survived by her three children: Jay W. Bliss of St. Augustine, FL; Daniel J. Bliss of Rock Hall, MD; and Barbara B. Irwin of Valencia, CA, and her sole surviving sister, Kathleen Thomas of Hanover, PA. Relatives and friends are invited to attend a Memorial Service in the Glasford Room at Homestead Village, 1800 Village Circle, Lancaster, PA., on November 25, 2017, at 11:00 a.m. Friends may greet the family from 10:30 a.m. Interment will be private in the Memorial Garden of the Church of the Apostles. If considering a memorial gift please make a donation to the Red Cross for disaster relief.

Offer Condolence for the family of Thelora D. Bliss