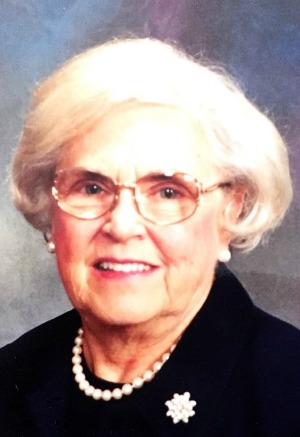 Sarah Francis (Foster) Hemphill of the Willow Valley Communities in Lancaster PA passed on to be with her Lord on Friday, April 27, 2018 at The Glen at Willow Valley Communities, Lancaster, PA.  Born October 18, 1925 on a dairy farm in West Goshen Township, PA, she was the youngest of four children born to Robert and Elizabeth Seymour Foster.  While she was very young the family moved to Havertown, PA where she attended public schools and graduated from Haverford Township High School in l943. She was then employed by Smith, Kline and French Laboratories in Philadelphia and took evening classes at the Pearce Business School and the Philadelphia Bible College until she was married to William Hemphill Jr. on February 14, 1948.

In May of that year she and Bill moved to East New Market on the Eastern Shore of Maryland where he began his pastoral ministry in The United Methodist Church.  In addition to serving the three churches on this circuit, Bill traveled to Philadelphia two days a week to attend classes at the Temple University School of Theology while Sarah stayed home to take care of the administrative matters of the churches.  She soon became involved in volunteer activities: teaching Sunday School, working with Women’s groups, pianist for the High School choral group, etc.  As two sons were born to the family in the next 8 years and her husband was appointed to other churches, these activities varied to include work with the scouting program.  She was an outstanding Cub Scout Den Mother, but Sarah’s primary focus was always as homemaker for the family.

Sarah had the gift of being a good listener and of quietly sharing her faith with others. During her husband’s 41 years of full-time ministry she constantly undergirded his work in such a way that he described it as a “team ministry”. While living in the Wilmington area Sarah was a member of P.E.O. and briefly chaired its Scholarship Committee. She also enjoyed participation in the Brandywine Hundred Garden Club.  After Bill’s retirement, the couple moved to West View Shores in Cecil County Maryland where for 13 years they enjoyed life on the Chesapeake Bay and became active in the Elkton United Methodist Church while Bill served as part-time Associate Pastor.  In 2001 they moved to the Willow Valley Retirement Community of Lancaster and affiliated with First United Methodist Church there.

Sarah was predeceased by her parents and her three siblings:  Violet, Robert and Edward.  In addition to her husband, she is survived by her son William Bruce Hemphill and his wife Dorothy of Earleville, Maryland and by her son Robert Mark Hemphill and his spouse Scott Shrader of West Hollywood, California; by her grandson Dr. Richard J. Harrison, Jr. of Indian Harbour Beach, Florida and by her granddaughter Katherine H. Betterly and her husband Luke Betterly of Wilmington, Delaware, and by three very active great- grandsons:  William, Grayson, and Xavier.

A Memorial Service will be held on Saturday, May 5, at 11:00 a.m. in the Johnson Auditorium of Manor North of The Willow Valley Communities, 600 Willow Valley Square, Lancaster, PA.

A private Interment will be at the Arlington Cemetery in Upper Darby, PA.

The family requests that in lieu of flowers, memorial gifts could made to The United Methodist Committee on Relief, c/o First United Methodist Church, 29 East Walnut St., Lancaster, PA  17602 or to the Building Fund of that Church.  To leave an online condolence for the family, please visit: www.DeBordSnyder.com

Offer Condolence for the family of Sarah F. Hemphill