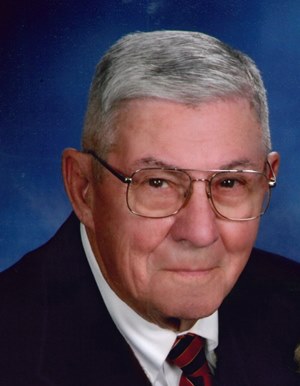 Samuel W. Bomberger, 88, of Lancaster, passed away on Tuesday, February 2, 2016 at Hospice & Community Care.  He was the loving husband of the late Elizabeth “Betty” H. Bomberger (Hofmann) who passed away in 2013.

Born in Lancaster on March 1, 1927, he was the son of the late Paul S., Sr. and Emma E. Stoneroad Bomberger.  He attended McCaskey High School, served in the Navy (at the age of 17) during WWII.  Upon return, he earned his Bachelor’s degree from Rider College.

After completing his college education Mr Bomberger entered into the family business building homes. From there he moved into the banking industry and built a successful career as an Internal Auditor. In 1992 he retired as Sr. Executive V.P. of Internal Audit. He returned to his passion of building by remodeling his shore house and daughter’s home. He took on an even greater challenge by building his other daughter’s home.

In his spare time he enjoyed fishing, traveling, golfing, duckpin bowling, family dinners, and spending time with friends and family at his summer home on Long Beach Island.

Relatives and friends are respectfully invited to attend a Funeral Service at First Presbyterian Church, 140 E. Orange St, Lancaster, PA 17602 on Tuesday February 9, 2016 at 11:00 AM. A viewing will be held on Tuesday at the church from 9:00 AM until the time of the service.

Interment will be private at Greenwood Cemetery.

Offer Condolence for the family of Samuel W. Bomberger