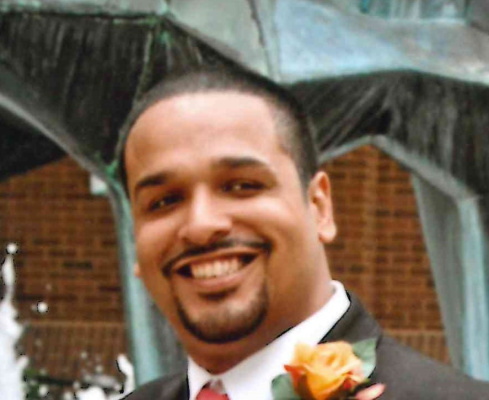 Samuel “Vision” Bonano, 38, of Lancaster, Pennsylvania, passed away on the morning of January 3rd, 2022, at his home. He was the loving husband of Tanya Marie Bonano.

He was born in Brooklyn, New York to Wilma Ivette Medina and Carlos Luis Bonano. He attended Manheim Township High School before being homeschooled and got his GED through the Christian Homeschool Association of Pennsylvania.

Despite his visual impairment, Samuel lived a fulfilling life. He enjoyed riding his bicycle, playing basketball, and wrestling during his youth. He loved watching wrestling and would go to pay-per-views when he could. His favorite sports teams were the Giants and the Yankees. As a child, he would let his sister Amy put headbands on him and call him “Samuelo”.

He loved playing video games and would often beat others in fighting games such as Street Fighter as well as wrestling video games. He loved to sing. He also had a passion for rapping and making music. He was a lyrical genius. He loved to laugh and crack jokes to make others laugh with him. If he was a fictional character, he would be Ernie from Sesame Street.

He worked at the Blind Association and was an honor worker which led to his picture being placed on billboards and advertisements for the company.

His and his wife’s motto was “Let’s do stuff!” and they loved to dress up before going out together. He loved playing kickball with his daughter, Maya whom he considered the light of his life.

Relatives and friends are respectfully invited to attend a funeral service in the place of 141 E. Orange Street, Lancaster, PA 17602 on Monday January 10th, 2022 at 11:00am with Pastor Joel officiating. Friends may greet the family from 10:00am until the time of the service.

Offer Condolence for the family of Samuel “Vision” Bonano