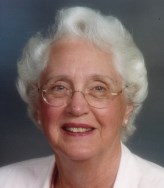 Ruth Sachs Allison, 88, of Lancaster passed away in the presence of family on Saturday afternoon, February 20th. Ruth was born and raised in Metuchen, New Jersey. She was the daughter of the late Herman and Pauline (Werner) Hoops (Metuchen, New Jersey), former wife of Ross H. Sachs for 52 years (deceased Feb 2, 2001) and the wife of Richard “Dody” Allison.

After graduating from Gettysburg College, Ruth was a devoted wife and mother to her family. Known for her family-style meals and homemade applesauce, Ruth also worked as a home economics teacher, taught gourmet cooking classes, served as court clerk, and was the outreach director at First United Methodist Church in Lancaster.

In 2001, Ruth published a cook book, Family Favorite Recipes, for friends and families to enjoy. The Sachs family has reprinted this collection as the family grows. Ruth served family-style meals up until weeks before she passed.  She entered many contests, and won many, including a trip to Ireland sponsored by W.G.A.L. and various prizes.  She was an accomplished seamstress, sewing for herself and her children, including prom gowns with matching coats.

In addition to her husband, she is survived by her four children and their families:

In addition to her parents, she was predeceased by her great-grandson Ephraim Ross McCann, and her brother, Frank Hoops, of Fort Lauderdale, Florida.

Relatives and Friends are respectfully invited to attend a Memorial Service in First United Methodist Church, corner of Duke and Walnut Streets, Lancaster, PA on Friday, February 26, 2016 at 11:00 a.m. with the Rev. Kerry L. Leeper officiating.  The family will greet friends in the Gathering Place of the church on Friday from 10:00 a.m. until the time of service.

Offer Condolence for the family of Ruth Sachs Allison