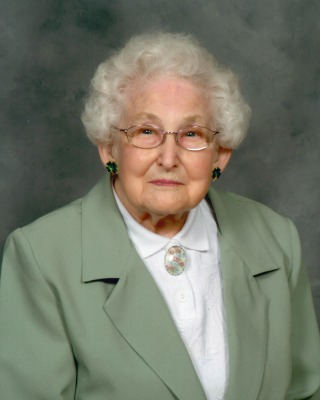 Ruth M. Ebersole, 100, of Lancaster, passed away on November 16, 2016 at Homestead Village.  She was the wife of the late Merrill A. Ebersole who preceded her in death.

Born in Middletown, PA., Ruth was the daughter of the late John P. and Grace G. (Miller) Moyer.

A graduate of Elizabethtown College, she later received a banking degree through American Institute of Banking while working at Farmer’s Bank & Trust Company.  She then spent much of her career serving as a personal secretary for a number of organizations.

She was a member of Geyer’s United Methodist Church in Middletown, PA and currently attended Grace Baptist Church in Lancaster.

Relatives and friends are respectfully invited to attend a Memorial Service at Homestead Village, 1800 Village Circle, Lancaster, PA 17603 on Wednesday, November 23, 2016 at 11:00 AM.  Friends may greet the family immediately following the service.  Interment will be private in Laurel Hill Cemetery.  Contributions may be made in her memory to Homestead Village Endowment Fund at the address shown above.

Offer Condolence for the family of Ruth M. Ebersole