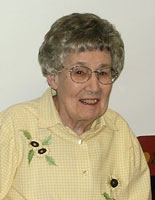 Since retiring back to Lancaster County, she has been a docent at Landis Valley Farm Museum and North Museum, a volunteer tax preparer with the VITA program, and a member of the Board of Directors of Quest for Learning. She and her husband co-chaired the Library Committee at Homestead Village and she continued in this role after her husband’s death until this past year. She was a member of the Iris Club and an associate member of First Reformed United Church of Christ.

Offer Condolence for the family of Ruth L. S. Dickson