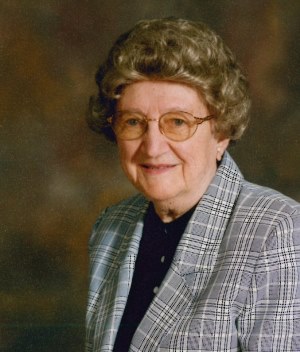 Ruth J. Wiggins, 102, went to be with her Lord on September 19, 2015 at Willow Valley Manor where she had resided since 1985.  While at Willow Valley Manor, she served as secretary of the Resident Council and was a volunteer in the Health Care Unit.  She was the wife of the late Charles F. Wiggins Jr. for 69 years.

Born in Philadelphia, she was the daughter of the late Harry H. and Clara M. (Pressler) Jackaway of Audubon, NJ.

She graduated from Audubon High School and attended Philadelphia College of Bible, teaching Sunday School for many years.  She had served as Financial Secretary for the Children’s Fresh Air Home, Wildwood, NJ, was a member of the Woman’s Board of Cooper Hospital in Camden, NJ, and held many offices in The Haddon Fortnightly of Haddonfield, NJ, serving two years as president.

She is survived by a niece Anne Jackaway and her children, Alexandra Noghaven and Genevieve DelSol; and a nephew, David Jackaway.  Also surviving are many cousins.  She was predeceased by her late brother, Lt. Cmdr. Harry E. Jackaway, U.S. Navy.

Services will be private and at the convenience of the family with casketed Interment on Friday, October 2, 2015 in West Laurel Hill Cemetery, Bala Cynwyd, PA.  In lieu of flowers, contributions in her memory may be made to Water Street Rescue Mission, 210 S. Prince St., Lancaster, PA 17603.

Offer Condolence for the family of Ruth J. Wiggins