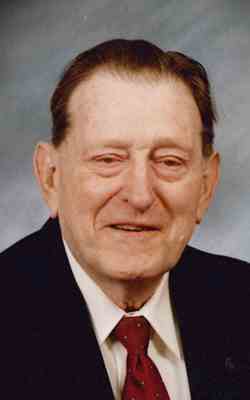 He was married 67 years to Grace Thomspon Ott.  Born in Philadelphia, he was the son of the late Russell G., Sr. and Agnes Speece Ott.

Russell was a graduate of Old Northeast High School in Philadelphia.  He was retired from AT&T and prior to that had worked for AT&T.  In his retirement he had worked part time in the custodial department at Manheim Township School District.

He was a member of St. Paul’s United Methodist Church in Mountville, and had been a member of the choir.  Russell was a longtime member of Walker Lodge #306 I.O.O.F. of Germantown, and had been active for many years in the Noon Day Optimist Club of Lancaster.  He enjoyed raising tomato plants and had enjoyed sports, especially baseball.

Russell served in the U.S.  Army during World War II with the 814th Military Police Company

Surviving besides his wife is a son, Bruce R., husband of Rev. Sally W. Ott of Lititz, as well as several cousins, nieces and nephews.

Offer Condolence for the family of Russell G. Ott, Jr.