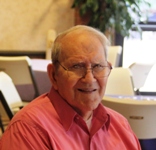 Russell C. Dunkelberger, 91, a resident of Conestoga View for the past three years, passed away peacefully in his sleep on October 20, 2011.  Born on August 24, 1920 in Irish Valley, PA, he was the son of Donna (Foy) and Clarence Dunkelberger.  Russell was married to Alma C. (Dunkelberger) Dunkelberger.  They would have celebrated 69 years of marriage in November.

Having lost his father at the age of 8, he attended Girard College in Philadelphia, a home for fatherless boys and graduated in 1938.  Russ was employed at Glenn L. Martin airplane factory in Baltimore prior to his service in the army.  During WWII he was stationed in the Philippines and Japan.  Following his discharge he held several jobs in plumbing and heating before taking a full-time position at Armstrong Cork Co. Research and Development Facility.  He retired from Armstrong in 1975 after 18 years and taught at Willow St.Vo Tech for a year before starting his own plumbing business.  He retired in 1997.

Russell sang in the chancel choir at First United Methodist Church, Lancaster where he had been a member since 1948.  He was also active in the Wesley Singers, mission commissions and the married couples Sunday school class.  His singing in the choir led to involvement in Lancaster Opera Workshop, Kiwanis musical productions and SPEBSQSA (Barbershoppers).

His talents for carpentry led to his helping with set construction.

In addition to his wife Alma, Russ is survived by three daughters, Corinne A., Elizabeth J., and Kathryn L., wife of Christopher G. Armstrong; 3 grandchildren; 3 great grandchildren and many nieces and nephews.  In addition to his parents, he was predeceased by 3 sisters and 4 brothers.  Russell was well known for his cheerful disposition and sense of humor.  He will be missed by all who knew and loved him.

Relatives and friends are respectfully invited to attend a memorial service in First United Methodist Church, corner of Duke and Walnut Sts., Lancaster, PA on Wednesday, October 26th at 11:00 A.M.  Friends may call at the church on Wednesday from 10:30 A.M. until the time of service and at the Kearney A. Snyder Funeral Home, 141 E. Orange St., Lancaster, PA on Tuesday, October 25th from 6:00-7:00 P.M.  Contributions in Russell’s memory may be made to the Music Ministry of First United Methodist Church, 29 E. Walnut St., Lancaster, PA 17602

Offer Condolence for the family of Russell C. Dunkelberger