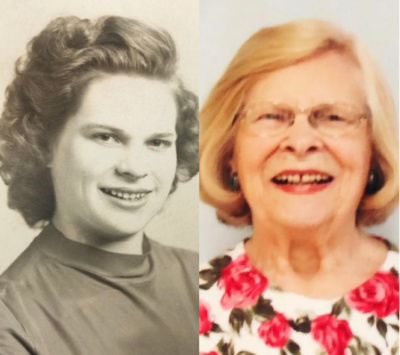 Wife, mother, homemaker, caregiver, and educator, Rosemary “Rosey” (Harper) Bucy entered into the arms of her Savior on October 9, 2020, at the age of 92.

Fortunate to have spent a well-lived life, Rosey could not tell a joke to save her soul, so it is undoubtedly a good thing she was a devout Christian. She was a good friend to her many lifelong pals, some of whom have saved a seat for her beside them in heaven and the others whom Rosemary will be waiting to greet upon their arrival. She also earned the deep respect, admiration, and love of her children (even though she threw away the one thing that we all wanted—a Hallmark Easter centerpiece covered with both pictures of bunnies and gravy stains from many well-cooked Easter dinners.) No mother will be missed more.

Born on New Year’s Day in 1928 in Cambridge, Ohio, she was the daughter of Rev. James Marshall and Ruth (Boyd) Harper. Rosemary grew up in Guernsey County. At the age of 11, she gave her life to Christ and was baptized in a bend of Clear Fork Creek. She became a farmer’s daughter a year later, when her father was given a plot of land to farm by one of his brothers. For several years, they lived in what had been a smokehouse on the property. Rosemary graduated from Madison High School in 1945.

Shortly after graduating from high school, she moved from rural Ohio to downtown Chicago, enrolling in Moody Bible Institute. She majored in Christian education and music and graduated in 1949. Several years later, while working at an RCA factory, she met James Frederick Bucy (1921–1992), of Steubenville, Ohio. They married on April Fool’s Day (although both of them took their marriage very seriously) in 1955. At the same time, Rosemary worked on her bachelor’s degree in home economics at Taylor University, Upland, Indiana. She graduated from Taylor the same year she married.

Rosemary earned her master’s degree from Ball State University, in Muncie, Indiana, in 1967; she taught home economics for 23 years at Edward Hand Middle School. She retired from teaching in 1992.

In her home, she raised her three daughters and cared for both James, who was stricken with Parkinson’s disease, and later, her mother, who spent the last years of her life in Lancaster after the death of her husband, Rosemary’s father.

She is predeceased by her husband and her only sibling, Lucille Ann Harper Smith (1935–2020), of Wynantskill, New York. She is survived by her three daughters; her grandson Jonathan David Kenneweg; and her granddaughter Laurel Ann Kenneweg.

A memorial service honoring her life will be held at Westgate Baptist Church on her birthday, January 1, 2021 at 2:00 PM.

Offer Condolence for the family of Rosemary “Rosey” Bucy