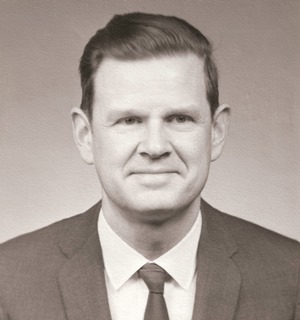 He was born March 1, 1925 in Cincinnati, OH, and raised there and in Louisville, KY. Roger was the son of the late Harold Higgins Thompson and Mildred Liwrey (Rogers) Thompson.

Roger worked at Farnsworth Television and Radio Corporation in Fort Wayne, Indiana, and at DuMont Laboratories in Clifton, New Jersey. He then worked for many years for RCA, both in Princeton, New Jersey and in Lancaster, Pennsylvania.  His work included advances in transmission and recording of television signals, coordination of transmission standards, and development of a single beam electron gun and the use of it in a color television cathode ray picture tube.  He earned many patents for his work.

Roger built a short-wave radio at the age of 14, became a first class radio operator at the age of 16, and worked at several radio stations. He graduated from Male High School in Louisville, KY and enlisted in the Navy during World War II. He was accepted into the V-12 officer training program.  As a part of that program, he graduated from the University of Louisville as an officer with a degree in electrical engineering.  He then served aboard the USS Denver until the end of the war.  After the war, Roger married, started a family, and earned his master’s degree in electrical engineering from Stevens Institute of Technology in Hoboken, NJ.

Roger was a private pilot, owning his own small plane. He enjoyed traveling, and flew his family to every continental state, Canada and the Bahamas.  He also enjoyed contra and square dancing with several local groups as well as national groups.  He often attended dancing workshops at various colleges and universities.  He always was appreciative of all that he was able to have and to do with his life, and quietly gave back of his time and resources as the need would arise.  He was a wonderful example to his family of the virtues in life of honesty, perseverance, good humor, loyalty and many more.

In addition to his parents, Roger is predeceased by his wife of 65 years, Mary Alice (McDermott) Thompson in 2011 and his brother-in-law, Robert (Bob) Yantz in 2013. Surviving is a sister Laura Jane (Jen) Yantz of Kingsport, TN.  Also surviving is a daughter Ann (Thompson) Caton and her husband Mark, of Uniontown, PA, a son Bruce Thompson of East Petersburg, PA, and a nephew who was raised as a son, Ted Adams, of Philadelphia, PA.  He has three grandchildren, Seth and his wife Amy, Matthew, and Marilyn, all of Uniontown, PA.  And he has three great-grandchildren, Seth II, Casey, and Jacob, also of Uniontown, PA.  Also surviving are many cousins, nieces and nephews.

Services will be private.

Offer Condolence for the family of Roger D. Thompson