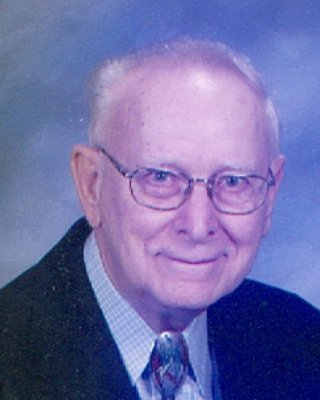 Robert T. Millard of Lancashire Terrace, entered into rest on October 10, 2019 at Brethren Village. He was born in 1920 in Spring City, Chester County, PA, the son of Clarence and Josephine Millard. He was the husband of Elizabeth Glatt Millard.
He served in the 7th US Air Corps in Hawaii and the Philippines from 1943-1945. He was a graduate of Bloomsburg State College in January 1949, and received his Master’s Degree in Speech Pathology at the University of Iowa in August 1950. He was the first full time Speech Pathologist at the Lancaster Cleft Palate Clinic from 1950-1985. He was a consulting Speech Pathologist at the Milton Hershey School for 38 years, and also consulted at the Elizabethtown Masonic Home, retiring in 1994.
He is survived by two sons, Robert Millard II of Lancaster, Dr. James Millard (Karen) of Dresher, PA, and a grandchild, Carolina Millard of Philadelphia, PA.
As a member of the Grandview United Methodist Church for more than fifty years, he served on the Hackman Memorial Garden Committee from its inception. A private graveside service will be held in Grandview United Methodist Church Memorial Gardens for both Mr. and Mrs. Millard simultaneously. The family requests memorial contributions be sent to the Memorial Garden of the Grandview United Methodist Church, 888 Pleasure Road, Lancaster, PA 17601 or to the Lancaster Cleft Palate Clinic, 223 N. Lime Street, Lancaster, PA 17602. To leave an online condolence, please visit www.DeBordSnyder.com

Offer Condolence for the family of Robert T. Millard