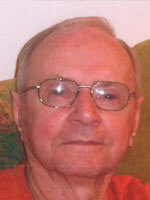 Robert Skiles Wettig, 93 of Lancaster, passed away Thursday, December 15, 2016 at Quarryville Presbyterian Retirement Community where he lived for the past 3 years.  Born in Lancaster, he was the son of the late Walter and Margaret (Hauck) Wettig.  He was married to the late Verna Yuninger and more recently, June Rineer.

Throughout his life he worked at Hamilton Watch and the United Post Office where he retired after 35 years.  He was also a Free Mason. He enjoyed going to the mountains, hunting, fishing and spending time with his family who will miss him greatly.

He is survived by a daughter, Linda M. (George) Laukhuff of Quarryville; granddaughters: Karen Lefever, Korinne Heidelbaugh and Kristy Glackin; grandsons: Bob Laukhuff,  and Jeff Laukhuff; 2 step daughters; 3 additional grandchildren; 10 great-grandchildren and 2 great-great grandchildren along with one brother, Kenneth Wettig.  He was predeceased by a son, Robert S. Wettig, Jr. and a sister, Daisy Darrenkamp.

Offer Condolence for the family of Robert Skiles Wettig