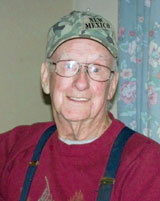 Robert Merl Ford in his 88th year went to be with his Lord and Savior on Sunday, September 2nd at Lancaster Regional Medical Center. He was the son of Freeman and Ruby Fernburg Ford and was married to the late Annette M. DeSallier Ford.

He is survived by 3 sons, Ronald of Lancaster, and twins Barry of Alabama and Gary of Columbia. He also had 2 sons, Henry and Albert who are deceased. He also has 4 grandchildren and 2 great-grandchildren.

He is survived by sisters, Blanche of Conestoga, Romaine, wife of Gordon Sneath of Willow Street, Doris wife of Ronald Heisey, and Annette Kurtz, all of Mountville, and a brother, Freeman “Pete” husband of Janet Ford of Palmyra. Sisters, Caroline and Esther, and a brother, Charles “Chub” preceded him in death.

He is survived by his long time companion Mildred K. Kolp, and her two children Charles E. Murray, III and Jodi Lynn Minnick; and her 5 grandchildren.

An auto mechanic all of his life, he worked at various garages in Lancaster, mostly in front end alignment and frame straightening. A real fan of racing, he loved the sprint cars and NASCAR stock cars.

He will be greatly missed by his family and friends. He had a big heart and was always willing to do anything for anybody.

A Celebration of Life Service will be held at Grace E. C. Church, corner of Shippen and Locust Streets, Lancaster on Thursday, September 6th at 10 AM with Pastor Mark Ammerman officiating. The family will visit with friends from 9 to 10 AM at the church on Thursday. Interment will be at Fort Indiantown Gap National Cemetery. If desired, contributions may be sent to Hospice and Community Care P. O. Box 4125 Lancaster, PA 17604-4125.

Offer Condolence for the family of Robert M. Ford