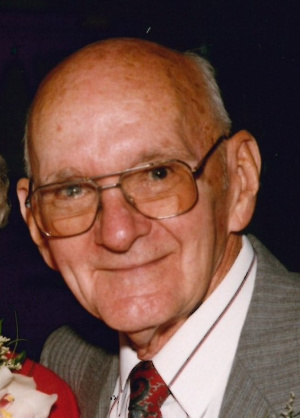 Mr. Robert L. Corder of Lancaster completed his earthly journey on Monday, April 27th 2020.  He was 98 years old.  Mr. Corder was born in Springhill Township in Western Pennsylvania on December 12, 1921, the son the late Clyde and Katherine Corder.  In 1942 he married Alta Margaret Conway and together they raised three daughters. WWII interrupted their lives when Bob was drafted into the Navy.  He proudly served in the Seabees and was one of the men who guarded the plane that dropped the atomic bomb on Hiroshima.  He was present at the famous raising of the American Flag on Iwo Jima. Following the war, he returned to Smithfield where he worked as a meat cutter. Realizing that there wasn’t a future for his family in that small town, he went to work for the USDA in 1960 as a Federal meat inspector and was assigned to a position in Lancaster. Following his retirement in 1987 Bob enjoyed woodworking and gardening and could still be found on his knees weeding his flower beds well into his nineties.  He was a member of the Leola United Methodist Church where he and his wife of 62 years were active in the Super Seniors group.

Bob was preceded in death by his wife in 2005 and by his parents and two siblings.  He is survived by his daughters, Kay, wife of James Cameron, Dottie, wife of Richard Papez and Robbin, wife of Robert Finkbiner.  He was very proud of his six grandchildren, Craig Cameron (Lisa), Judd Cameron (Amy), Darby Papez (Melissa), Daniel Papez (Cristy), Heather Peffley (Darryn) and Megan Nowak (Matthew).  Fourteen great-grandchildren also survive.

Interment will be private at the Conestoga Memorial Park in Lancaster.

Offer Condolence for the family of Robert L. Corder