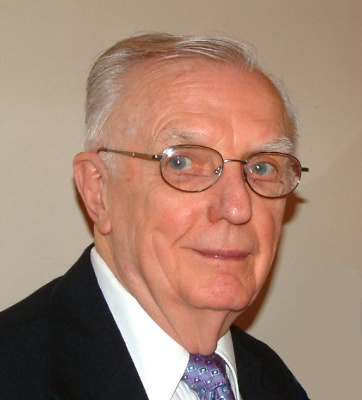 Robert H. White, 95, a longtime resident of Woodcrest Villa Retirement Community went to be with his Lord and Savior on Friday, April 24, 2020. Born in Lebanon, Pennsylvania to William E. & Mary Jane White (Groff) on January 29, 1925, Bob and his brother Bill Jr., grew up working hard and raising chickens before moving to Jersey City in their teen years. He proudly served his country in the United States Navy and saw action in both the Pacific and European theaters during WWII. His love for people and his attention to detail and safety made Bob’s occupation as a railroad conductor a perfect fit. Bob’s 41-year career spanned railroad name changes of Erie, Erie Lackawanna, Conrail, and NJ Transit.

Always dependable and eager to help, Bob worked behind the scenes in many venues. He set up video for live-streaming and chairs for exercise classes, and transported people to therapy within the Mennonite Home Communities. Bob was a longtime member of the Hawthorne Gospel Church, Hawthorne, NJ serving as usher, sound technician, counter, along with other positions within the Sunday School administration. He continued his service at Grace Baptist Church after moving to Lancaster.

Bob was a wonderful man, husband, father, grandfather, and great grandfather. His motto of “Be sure you’re right, then go ahead” was exemplified throughout his life. He not only “knew the right thing to do”; he did it. Widowed at a very young age by the death of his first love, Mary White (Frederick), Bob met the love of his life, Margaret A. White (Meyer) on the train and shared a 56-year long journey. His legacy lives on through his five children, Robert W. White & wife, Cathy, Edward J. White & wife, Karen, Janice D. White Renga, Carole White-Connor & husband, Joe, and Steven J. White. Bob is also survived by nine grandchildren and three great-grandchildren.
Throughout his later years, Bob was blessed to share a loving relationship with his special lady, Jean Gilday.

The White family wishes to extend a heartfelt ‘thank you’ to the staff at the Mennonite Home for the unsurpassed care that Bob received during his stay, especially during these recent days of isolation. You all are truly heroes and have become family.
A man of few words, quick smiles, and brilliant blue eyes; his last words were, “Thank You”.
No, Dad…thank YOU.

Offer Condolence for the family of Robert H. White