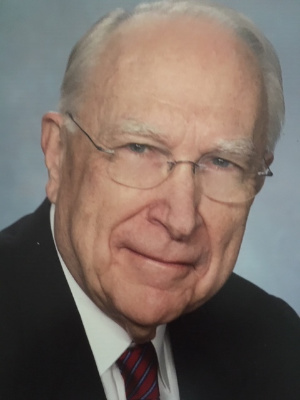 Robert Eugene Patterson, 88, of Willow Street, PA died peacefully in hospice care on Wednesday, June 17, 2020 of cancer. He was the son of the late Blanchard S. and Lydia L. Patterson. His wife of 61 years, Dorothy J. Patterson, had died of cancer in 2012. Robert is survived by his brother James Patterson of Lititz, PA and two children: Craig R., husband of Cynthia Schnee Patterson of Ellicott City, MD; Tracy A., wife of Kerry Cunningham of Mechanicsburg, PA; and grandson Brian R. Cunningham of Mechanicsburg, PA. He is also survived by his beloved companion Carolyn Blish of Willow Street, PA.

A native of Lancaster, Robert graduated from McCaskey High School in 1950, Franklin and Marshall College in 1959, and did graduate work at Temple University and the Harvard University School of Public Health. He was a Certified Public Accountant, and his career as a financial executive spanned nearly 60 years, with experience in for-profit, not-for-profit, education, and government sectors.

Robert began his career with Armstrong World Industries in 1950. He served in the US Army Finance Corps from 1952 to 1954. He moved to Hamilton Watch Company in 1969, where he served as Controller and Treasurer. He later served as Vice President of Finance and Administration at K-D Manufacturing Company. He moved to Pennsylvania Blue Shield in 1976, and became Senior Vice President and Chief Financial Officer until his retirement in 1997. He then served as Chief Investment Officer for the Commonwealth of Pennsylvania until 2002, and Finance Director of the Pennsylvania Lottery until 2004.

During his career at Pennsylvania Blue Shield, he served as Chairman of the Board for HealthGuard of Lancaster and for Keystone Health Plan Central. An advocate of health maintenance organizations, he helped pioneer their development throughout Pennsylvania. He served as a gubernatorial appointee to the Pennsylvania Cost Containment Council, and served as its Treasurer for ten years. Robert was appointed by Governor Ridge in 1995 to the IMPACCT Commission, which studied ways to improve state government financial operations. He also served as Chapter President and national vice-president of several professional finance organizations, including the Institute of Management Accountants (Emeritus Lifetime Member) and Financial Executives International.

Robert was a lifelong advocate of education in all its forms. As an Adjunct Professor, he taught accounting at Franklin and Marshall College’s Evening Division from 1961-1981, helping many aspiring accountants to understand the importance of the language of business. Post-retirement, he served on the Millersville University Foundation Board (Life Director), and was President from 2006 to 2009. In 2016, he created two new student scholarships at Millersville University and one at the Pennsylvania College of Health Sciences in his and his late wife Dorothy’s names.

Robert’s professional and civic affiliations reflected his deep commitment to giving back to the Lancaster community. He generously contributed his leadership experience to LancasterHistory (Life Member), the James Buchanan Foundation Board, the Lampeter-Strasburg YMCA Building Campaign Steering Committee, the Lancaster Chamber of Commerce and Industry Board, the Lancaster Cleft Palate Clinic Board, the Lancaster Symphony Orchestra Board, the Center for Parish Development Board, the Pennsylvania Chamber of Commerce and Industry, the Pennsylvania Institute of Certified Public Accountants, and the American Institute of Certified Public Accountants. In recent years, he was a member of the Lancaster General Health Foundation Board and chairman of the Ann B. Barshinger Cancer Institute Development Committee. He served on the Pennsylvania College of Health Sciences Campaign Executive Committee, Hospice & Community Care financial committees, and co-chaired the Willow Valley Communities Campaign Planning committee. In 2005, he was elected to the West Lampeter Township Board of Supervisors, and served with distinction for 14 years in key financial and community fundraising roles.

At the time of his death, Robert was a devoted member of the Grace Community Church of Willow Street. Contributions in his memory may be made to his church, the Lancaster General Health Foundation, 609 Cherry Street, Lancaster, PA 17604, and Hospice and Community Care, 685 Good Drive, Lancaster, PA 17604. A private interment ceremony will take place at the convenience of the family. A memorial service to celebrate Robert’s life will be scheduled and announced at a future time.

Offer Condolence for the family of Robert Eugene Patterson