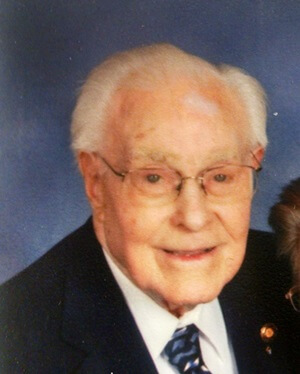 Robert C. Marvel, 89, of Lancaster, passed away on Friday, January 22, 2016 at The Masonic Village in Elizabethtown, PA. He was the loving husband of Fay (Witman) Marvel as well as the husband to the late Mary E. Marvel who passed away in 1978.  Born in Lancaster, PA., he was the son of the late Paul M. and Edith (LeFevre) Marvel.  After graduating from J.P. McCaskey High School he later attended Franklin and Marshal College.

He was a member of the Rotary Club of Lancaster, the Masonic Lodge #476, a Board member of the Salvation Army, and an original committee member of the YMCA’s Good Friday Breakfast and proudly attended all 62 of the breakfasts.

He was a member of Grace Baptist Church in Lancaster.

In addition to his wife, Fay, he is survived by daughters, Pamela Floyd of Lancaster, PA, and Judith Smithie of Tampa, FL.  He was preceded in death by a brother Paul and a sister Muriel.

Relatives and friends are respectfully invited to attend a Memorial Service at Grace Baptist Church, 1899 Marietta Ave., Lancaster, PA 17603, on Thursday, January 28, 2016 at 11:00 AM with the Rev. Marvin Reich officiating.  Friends may greet the family from 10:00 AM until the time of the service. Interment will be in Fairview Cemetery in Manheim, PA.

In lieu of flowers, contributions may be made in his memory to: Masonic Villages, 1 Masonic Dr., Elizabethtown, PA 17022, Lancaster Salvation Army, 131 S. Queen St., Lancaster, PA 17602, or to Grace Baptist Church at the address listed above.  To leave an online condolence for the family please visit: www.DeBordSnyder.com

Offer Condolence for the family of Robert C. Marvel