You are here: Home / Obituaries / Robert B. Lyter 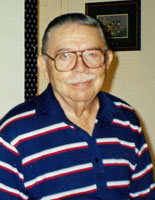 Robert B. Lyter, 95, of Lancaster passed away Thursday, Feb. 9, 2012 at Conestoga View. Born in Harrisburg, he was the son of the late Wayne and Blanche Brandt Lyter. He was the husband of the late Jane Lyter and the late Jean Lyter.

A musician all his life, he was a drummer for his band, Bob Lyter and The Headliners. Bob also worked for Don Randall Music Co. until retiring in 1979. He was also a train enthusiast.

Funeral Services will be held from the Kearney A. Snyder Funeral Home 141 E. Orange St. Lancaster on Monday, Feb. 13, 2012 at 11 AM with interment following in Conestoga Memorial Park. Friends may call from 10 to 11 AM at the funeral home on Monday. In lieu of flowers, contributions may be sent to the charity of one’s choice.

Offer Condolence for the family of Robert B. Lyter