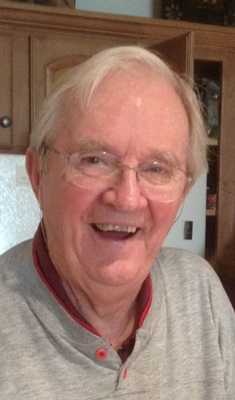 Richard (Dick) W. Jensen, 86, passed away peacefully on February 20, 2017, at the Lakeside Skilled Care Facility of Willow Valley Communities, located in Willow Street, PA (near Lancaster). Dick was able to engage actively with visitors until just a few days before his death from cancer. His spirit, dignity, and sense of humor remained intact until the end. Both his sons were with him at the time of his passing.

Beloved husband, father, grandfather and friend, he was predeceased by his wife of 61 years, Patricia. He is survived by his siblings, Bonita (Bonnie) Adsit and Roderick (Rod) Frazier, and by his children and grandchildren: son Mark, Mark’s wife Karla and their children Sonja and Peter; and son David, David’s ex-wife Elizabeth Nardelli and their children Kathryn and Rebecca.

Born in Meadville, PA, Dick grew up in Saegertown, PA. It was as a child in Saegertown that he met and fell in love with Patricia (Pat) Smith, whom he married in 1953, the day he graduated from college. He remained happily married to her until her death in 2014. Following a year of graduate study in mathematics at Penn State, Dick began military service, participating in the occupation of Germany. Because of the nature of his assignment, he was able to bring Pat over to live with him “on the economy” in Frankfurt, Germany. This experience began a love of travel that continued throughout their lives.

After military service, and following a stint teaching in Ohio, Dick was hired by Westinghouse Corporation where he spent 11 years, being posted to assignments in Pittsburgh, PA, Connecticut, Indiana, and Ohio. After his time with Westinghouse, he made the move to a much smaller company, relocating the family to Mendham, New Jersey, where he and Pat resided for some 36 years. There Dick served in a variety of management functions distributed among manufacturing, marketing, and administration, finishing his career as a corporate Vice President. For several years after retirement from the corporate life, Dick was sole-proprietor of “Presentation Graphics”, an enterprise which allowed him to express both the teacher and artist aspects of his personality.

Dick grew up in very modest circumstances, and was keenly aware of the help he received from others. He was generous to a fault, particularly with his time and the amount of effort he spent on projects for organizations he was involved with. In retirement, he and Patricia spent much of the summer at “Svithjod”, a vacation home on the grounds of Chautauqua Institution that they maintained for more than twenty years. Their hospitality at Chautauqua was exceptional and well known. Their home and kitchen were open to family, friends, and visitors almost continually. Dick was also the driving force organizing the “Class of ‘91” of the Chautauqua Literary and Scientific Circle.

After much thought and investigation, Dick and Patricia decided that they would leave Mendham in 2004 to spend their final years residing at the Willow Valley Communities, in Willow Street, PA. There was some reluctance in this decision, as they left their home of many years for an entirely new place. With no previous experience of the area, they didn’t know what they should expect, but once established they were delighted with their decision. At Willow Valley they made many new friends, had many new experiences, and were involved in many activities, all of which brought them joy. Moving to Willow Valley was one of the best decisions they ever made.

A particularly important activity at Willow Valley was the Camera Club, of which Dick was a founding member. Throughout his life, Dick had always had aspects of both teacher and artist. He had been an enthusiastic photographer since his Army days, and over the years had tried to increase his skills, particularly after he started to become familiar with digital photography. He perceived that many people at Willow Valley were interested in photography, and many had digital cameras, but really they did not realize how to best use their equipment, or how to improve their image-making skills. The Camera Club set out to help people to move from “taking snapshots” to “creating photographs” — in other words, helping people to use the digital camera to create art. Largely as a result of Dick’s leadership, the Camera Club became the largest organized activity at Willow Valley, and remains so today.

After Patricia died, Dick learned that he was also afflicted with cancer. He underwent chemo, surgery, and radiation therapy, but eventually the cancer recurred. In the last months of his life he experienced increasing pain, which he bore with dignity. With the assistance of Hospice care for pain management, he was able to remain in his apartment until just a few weeks before the end. He was lucid, engaged, with his humor intact, until the very last days. His passing was very peaceful.

Dick loved and was loved by very many people. His life touched hundreds, and he is greatly missed.

There will be a Celebration of Life gathering at Willow Valley Communities, in the Spring Run Auditorium, at 10:00 AM on Saturday, May 13, 2017 and both friends and family are welcome. Interment of ashes will take place in Saegertown, PA on July 8, 2017.

Offer Condolence for the family of Richard W. Jensen