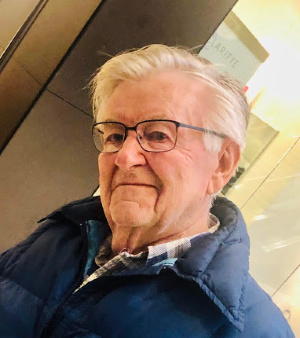 Richard Rutt Hershey, 89, of Lancaster, entered peacefully into the arms of his heavenly Father on January 31, 2020 at Country Meadows Retirement Community.

Born on May 22, 1930, in Gap, PA, he was the son of the late Harry Park Hershey and Anna Mae (Rutt) Hershey. He was preceded in death by his wife of 50 years, Mary Ellen (Rousseau) Hershey and siblings Rosanna Kreider, Ivan Hershey, Edwin Hershey (Velda) and Harold Hershey (Ruth).

Richard spent his childhood working on his family farm and this instilled a diligent work ethic that he passed along to his children. He was enlisted in the Army from 1954-1962 and worked as a truck driver for Packaging Corporation of America until he retired in 2000. He and Mary Ellen had a heart for children and together they made a home for their own nine as well as tending to the needs of 85 foster children throughout the years.

As a faithful member of Grace Baptist Church in Lancaster, Richard would often be seen smiling broadly as he sang in the choir.

The last three years of Richard’s life were spent as a resident at Country Meadows Retirement Community in Lancaster, where he quickly made his way into the hearts of the staff and residents. He loved singing and playing music at ‪Country Meadows‬, and was treated so lovingly by his “second family” there. ‬‬

Music was a big part of Richard’s life. He loved singing, listening to gospel music, and playing the piano and guitar. He always had a smile and a kind word for everyone he met. He had a steadfast heart that was loyal to his family, his nation, and his faith in Jesus as his Savior. Everyone that knew and met Richard loved him dearly. He touched their lives with joyful peace and gentleness, and we are all grateful for the life he lived.

Relatives and friends are invited to attend a Celebration of Life service at Grace Baptist Church of Lancaster, 1899 Marietta Ave, Lancaster, PA 17603 ‪on Saturday, February 8, 2020 at 11:00 am‬. Friends may greet the family ‪from 9:30 am‬ until the time of the service. Interment will be private.‬ ‬‬‬

Offer Condolence for the family of Richard R. Hershey