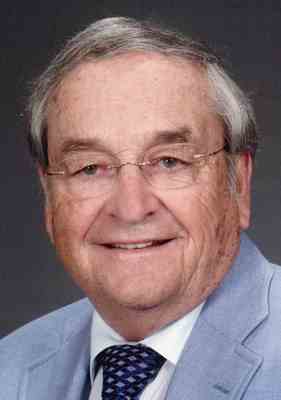 He was married 63 years to Norma High Forry.  Born in East Petersburg, he was the son of the late B. Earl and Fannie Root Forry.

Dick was the owner and operator of the former Forry’s Ag Service..  He also enjoyed driving school bus for the Conestoga Valley and Lampeter –Strasburg School Districts for many years.

Dick was a member of Calvary Church where he enjoyed singing in the choir.  He was a former member of Grace Baptist Church and had been active there as a trustee and choir member.   He was a longtime member of the Gideon’s International.

Music played an important role in his life and he had sung at hundreds of weddings and enjoyed singing with the Lan-For Quartet.  He also enjoyed golf, shuffleboard, camping and spending winters in Sarasota, FL.  His greatest enjoyment in life was spending time with his family.

Surviving besides his wife is a daughter, Cindy A. wife of Ira C. Herr III of Willow Street; two sons, Tom L. Forry and Gary L. Forry both of Bird-In-Hand; five grandchildren, Michelle Mellinger, Ryan Forry, Nicki Schulz, Sheila Kahler and Alysia Harnish; fifteen great grandchildren; two brothers, Harold husband of Ruth Forry of Mount Joy, and Merv husband of Martha Forry of Lancaster; a sister, Martha wife of Clyde High of Akron.  He was preceded in death by a sister Arlene Landis and by a brother B. Earl Forry, Jr..

A Funeral Service will be held on Friday, July 3, at 10:30 A.M. at Calvary Church, 1051 Landis Valley Road, Lancaster, PA with the Rev. Dr. G. Robert Kilgore and the Rev. Marvin Reich officiating.  Friends may call at the church on Friday from 9:30 A.M. until the time of the service.  Interment in the Mellinger Mennonite Cemetery.  In lieu of flowers, contributions in his memory may be made to the American Cancer Society or to Calvary Church.

Offer Condolence for the family of Richard R. Forry