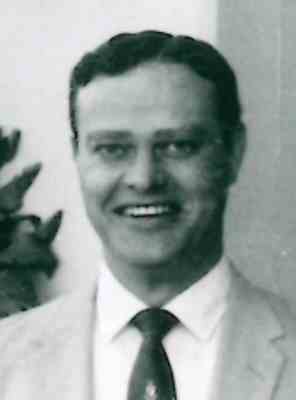 A special man passed from this life on September 30, 2016.  Richard Monroe Houck will be remembered fondly.  He was a son, brother, husband, father, grandfather, great-grandfather and a friend.

David was born December 20, 1926 in Port Royal, PA to Anna Belle and Sterner C. Houck but lived most of his younger years in Hanover, PA before moving to Dover, DE and Whittier, CA.  The family moved to Lancaster in 1960.

Dick met and married a wonderful young lady, Christine “Sally” Houck, in 1950, and they stood by one another through thick and thin, becoming great examples to their children, Tom, Bill and Kate.  He and his wife both graduated from Hanover (Eichelberger) High School and Gettysburg College.

During World War II he served in the United States Army Air Corps.

His first job out of college was working for Atlantic, pumping gas and doing oil changes, and then selling products to all of the service stations in Delaware.  Most of his working career he was a credit manager, beginning with Playtex in Dover, DE and Whittier, CA.  While at Armstrong Contracting and Supply (Now Irex Corp.) he and co-workers would walk each day to lunch at The Rendevous Restaurant in the basement of the former Watt & Shand.

When the family thinks about him, they recall the songs “Mister Moon” and “Sweetheart of Sigma Chi”, his foghorn sound, learning to drive using a stick-shift, Rehoboth Beach, tending to the fireplace, ping pong and tennis, his interest in the weather and the thermostat, grading papers with Mom, Disneyland, the basement, the basketball hoop, Christmas presents, throwing the ball in the backyard, and chocolate milk and comic books at the beach.

Dick never had anything but good to say about other. He was a creature of habit and followed the clock and calendar through the years. He was predictably a very good soul. We will miss you, Dad.

He is survived by his wife, Christine “Sally” Houck, a son Tom Houck of Lancaster, a son Bill Houck married to Jane Higinbotham of Lancaster, and a daughter, Kathryn Miles wife of Bill Miles of North East, MD; five grandchildren and four great grandchildren. Dick was preceded in death by his older brother Robert Houck and a nephew Scott Houck.

A private funeral service will be held at the convenience of the family. In lieu of flowers, contributions in his memory may be made to the Alzheimer’s Disease Association, 3544 N. Progress Ave, Suite 205, Harrisburg, PA 17110-9638.

Offer Condolence for the family of Richard Monroe Houck