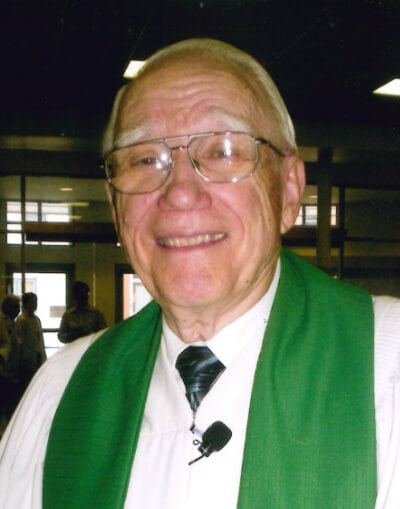 The Rev. Dr. William T. Cherry of Lancaster, 92, died on October 8, 2020, at the Mennonite Home, Lancaster PA. He is survived by his wife, Christine Virginia “Ginny” Cherry, with whom he shared 68 years of marriage.  Born in Philadelphia, he was the son of the late Dr. Clinton and Ruth (Miller) Cherry.

Bill started his academic career in architecture at the University of Pennsylvania, showing much promise and impressing the faculty with his renderings of various Philadelphia structures and statues.  But World War Two was in its last phase and interrupted his education at Penn to serve in the US Army.

The military provided an opportunity for challenge and refection and on his return from active duty in Germany Bill decided to give up a promising career in architecture and follow his father’s (and Grandfather’s) footsteps into the Methodist ministry.  He enrolled at Drew University and graduated with a Masters of Divinity and was subsequently ordained in the United Methodist Church.  To begin his ministry he served a few small churches in the Upper Main Line area, one of which was Paoli United Methodist, a fledgling church with a few dozen active members in a very small and very old building.   His time at Paoli was a great success.   Over the course of his 21 years there, he took in over a thousand new members, spearheaded the building of a new church with a much larger capacity and developed a vibrant active church community with strong worship, program, education and outreach components.

His next appointment was Grandview Heights in Lancaster, which gave Bill and Ginny an opportunity to experience life in Lancaster, where they would eventually retire.   Grandview was followed by an assignment to the District Superintendency of the Northeast District of Eastern PA conference.   His appointments continued with Arch Street United Methodist Church next to City Hall in downtown Philadelphia; and Ardmore United Methodist, where he retired in 1993 and where, by coincidence, his father had served years before.  He spent most of his retirement years serving First United Methodist Church in Lancaster as an interim pastor, teaching pastor, leader, mentor and friend to many. He will be remembered and missed by those who crossed his path.

As a preacher Bill was unparalleled and universally appreciated.  His sermons always challenged as well as comforted and he never hesitated to address controversial issues from the pulpit that he felt needed to be dealt with by the conscientious Christian community.  He was active in the struggle for racial equality in the 1960’s both in the Church and in the community.  He took part in the March on Washington and was in attendance for Dr. King’s famous “I have a Dream” speech.   In later years, Bill was also an advocate for LGBT rights. In addition, throughout his retirement Bill conducted his “Academy” adult education program, in which he explored all aspects of Christian faith and scripture.  He was a natural born teacher and the Academy was hugely popular along all his travels in the ministry.

He was an active member of the optimist club and Phi Beta, the Church’s Academic society, and was a regular and a valued member of the Annual Conference of the United Methodist Church, having been elected three times to Jurisdictional and General Conferences.

Bill and Ginny traveled extensively as his busy schedule allowed.  He was an avid golfer for most of his life and an enthusiastic fan of Philadelphia sports.  In the Winter he loved Christmas and his Christmas eve services were very special events that drew large crowds.  In the summer the family vacationed in the Poconos and Bill enjoyed his time there immensely and was always restored and recharged on his return to work.

The thousands of people who came in contact with Bill in the course of his life and ministry were drawn to his warm personality, the genuine interest he took in every one he spoke to, his unwavering faith and commitment to his mission, his marvelous preaching and the compassion that was so much a part of his life as a minister.  He will be missed by many.

Due to the current COVID restrictions a memorial service will be conducted at a later date. In lieu of flowers, memorial contributions can be made to First United Methodist Church, 29 E. Walnut Street, Lancaster, PA 17602;  or Mennonite Home Communities, 1520 Harrisburg Pike, Lancaster, PA 17601.  Please visit www.debordsnyder.com  to leave an online gift.

Offer Condolence for the family of The Rev. Dr. William T. Cherry