You are here: Home / Obituaries / Rev. Stuart B. Kauffman 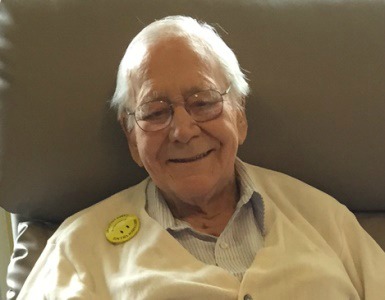 Stewart B. Kauffman, 97, a Church of the Brethren minister, died October 6 at Brethren Village, Lancaster, his home for 19 years.

Born May 14, 1919, in Reading, PA, he was the son of Melvin and Sarah Kauffman. In his youth he had a morning paper route and for several years he and his sister, Ethel, had a weekly radio program playing guitar and mandolin. Until recent years he continued playing classical guitar, and performed occasionally for various church and social events.

He graduated from Elizabethtown College and from Bethany Theological Seminary; in 1961 Bethany presented him with the honorary Doctor of Divinity degree.

Stewart served PA pastorates in rural Windber, Everett and Huntingdon.  From 1953-55 he was the administrator for the Church of the Brethren’s Eastern Region and from 1955-1960, Director of Ministry for the entire denomination,  For 14 years prior to his retirement in 1984, he returned to the General Board, working with the Stewardship Team. It was during this period that he wrote a book, Zella’s Mountain, about his work in the area of “Special Gifts.” He was a member of the Lancaster Church of the Brethren.

Offer Condolence for the family of Rev. Stuart B. Kauffman