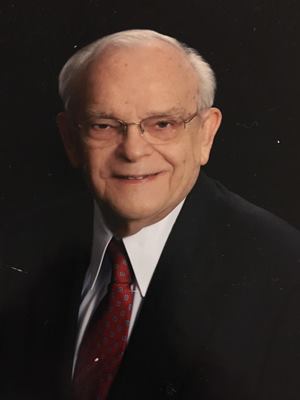 Rev. Grant, who went by Dick, was the Executive Director of the Lancaster County Council of Churches for 28 ½ years, 1958 to 1986. Under his leadership, the Council’s membership grew and its witness strengthened.

A lifelong advocate of Christian cooperation, Dick helped create multiple social agencies and interfaith programs. He advocated the practical expression of a Social Gospel including hunger and housing programs, transition opportunities for adolescents and adults, and pastoral care programs in hospitals. His legacy is alive in the work accomplished by the Council of Churches and other faith-based organizations.

Dick graduated from Fulton High School in 1939, and was awarded a Bachelor of Arts Degree from Syracuse University in 1946.  He went on to earn the Bachelor of Divinity Degree from Colgate Rochester Crozer Divinity in 1951.  After coming to Lancaster, he received his Master of Sacred Theology from the Lancaster Theological Seminary in 1971.

Dick began his ministry in the Northern New York Conference of the United Methodist Church in 1944. He was ordained an elder in 1948. He was appointed to Fernwood, Parish, Dugway, Parish Center, Avon, Fowlerville, East Bloomfield, Allen’s Hill, Rochester: Grace, Rochester: Centenary, Mohawk and Cedarville churches. He received a special appointment to serve the Lancaster County Council of Churches while retaining his membership in the Western New York Conference. After his retirement in 1986, he returned to serving churches in Lancaster County and Central Pennsylvania.

He was a recipient of various awards including the E.L.K. Sertoma Club Service to Mankind Award, and the Executive Director Emeritus and Steven Mentzer Award in Ecumenical Cooperation of the Lancaster County Council of Churches. The Senate of the Commonwealth of Pennsylvania and Lancaster County Commissioners recognized his leadership upon his retirement.

On June 4th, 1946 he married the love of his life, Caroline Ida Smith in her home church, North Presbyterian Church in Elmira, NY. They were married almost 70 years. She preceded him in death.

Dick is survived by his son, the Rev. Kenneth G.Y. Grant and his wife Marie L. Yannaco-Grant of Swampscott, MA, and his daughter Linda G. Jacob and her husband Gary Jacob of Medway, MA. He is also survived his grandchildren, Marisa and John Zastrow of Cumberland, Maine, Amanda Grant-Rose and Stephen Rose of Swampscott, MA, and Stefan and Pin Kwok Jacob of Singapore. He was also blessed with 7 great-grand children.

In lieu of flowers, the family asks that donations be made to the Lancaster County Council of Churches Endowment Fund, 812 North Queen Street, Lancaster, PA 17603. For help with a gift please contact Gail Rittenhouse, President and Executive Director, grittenhouse@lcchurches.org.  Please share your message of condolence with the family at www.DeBordSnyder.com.

Offer Condolence for the family of Rev. Richard E. Grant