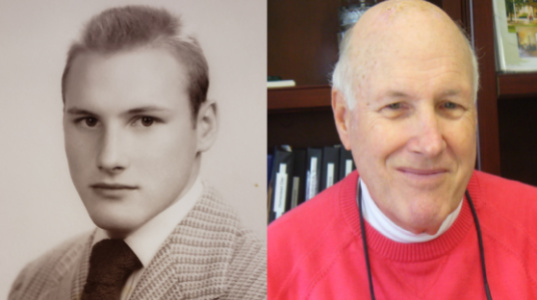 Born in Lancaster, where he was a lifetime resident, he was a son of the late Raymond F. and Ethel E. (Shelley) Wolf.

Ray was married to his high school sweetheart, Paula Snyder Wolf, for more than six decades until her death in May 2016.

In the years afterward, Ray would buy a single, fresh rose every Friday and place it in a vase next to her photo.

The couple met and began dating when he was a senior and Paula was a sophomore at McCaskey High School. An athlete who was on the baseball, soccer and wrestling squads, Ray also was a member of the National Honor Society.

He graduated in 1952 and enrolled at Franklin & Marshall College, where he was recruited as a wrestler by legendary coach Roy Phillips. Ray also played baseball and soccer for the Diplomats.

One of the stories he liked to tell was how he once hit a foul ball off of future Phillies skipper Dallas Green, who was then pitching for the University of Delaware.

Ray graduated from F&M in 1956 and got a job as a field representative with Retail Credit Co., which later became Equifax and ChoicePoint.

He was then drafted by the military and spent 1957 to 1959 in the Army in Richmond, Virginia. Upon moving back to Lancaster, he returned to his job and worked there full time until 1994. Ray was employed 20 more years part time with the company.

A Philadelphia sports fan from the time he was a child, he passed that on to his daughter. They spent countless hours talking animatedly about sports over the years, and watching games together on TV.

Enduring the highs and lows of Philadelphia fandom (with many more lows than highs), they appreciated the rare championships even more, the most recent being the Eagles’ win in Super Bowl LII.

As a family, they attended McCaskey and F&M football games in the 1970s, and F&M men’s basketball games for more than 40 years. Ray also followed the F&M women’s lacrosse team.

Ray, known for his gregariousness and quick wit, also liked to golf and to fish for bass. He was a former board member of the Lancaster County Sports Hall of Fame.

In their retirement years, he and his wife enjoyed gardening, going to Lancaster Central Market every Friday, and spending time at their cottage in Wrightsville along the Susquehanna River.

When their daughter was younger, the family took memorable vacations to the Jersey shore in the summer, first to Sea Isle City and then Ocean City. More recently, they would stay for a week along the Eastern Shore of Maryland, in Kent County, overlooking the Chesapeake Bay.

Ray and Paula took three trips to England over the years, most recently for their 50th wedding anniversary in 2005.

He was a member of St. John’s Episcopal Church in Lancaster, where he helped with the food pantry and the community breakfast.

Relatives and friends are invited to attend a Memorial Service at St. John’s Episcopal Church, 321 W. Chestnut St, Lancaster, PA 17603 on Saturday, July 10, 2021 at 10:00 AM.  A visitation will be held at the church from 9:00 AM until the time of the service.  In lieu of flowers, contributions can be made to the food pantry at St. John’s Episcopal Church at the address listed above.

Click on the link below to view Raymond’s’ tribute video:

Offer Condolence for the family of Raymond E. Wolf