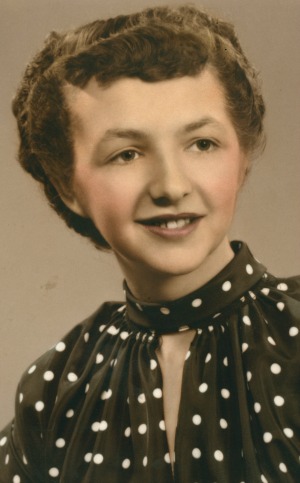 Phyllis J. Groff joined her husband of 66 years William K. Groff Sr. in heaven on July 10, 2018. She was preceded in death by her parents, Charles Miller and Verna Halbach (Whitcraft) and brother, Charles Miller Jr. She is survived by her sisters, Burnetta Fry and Joan Young; her son William K. Groff, Jr and his wife of Lancaster; her daughter Deborah J. Sherr, widowed, of Lancaster; her son, Wyatt E. Groff and his wife of Maytown; 8 grandchildren and 8 great-grandchildren.

Phyllis attended John Piersol McCaskey High School. She worked for many years and retired from Specialty Screw Machine Products. After retirement Phyllis continued to work as a Sexton with her husband at Grace United Church in Millersville. She was a member of Grace Evangelical Congregational Church of East Petersburg (formerly of Lancaster).

As a young girl Phyllis, known as the Nyoka of the West End, spent many hot summer days sipping Lime Rickeys at Smithgalls’ Pharmacy on West Lemon Street. Phyllis was an avid Bingo player and word puzzle solver. She especially enjoyed competing with contestants on Wheel of Fortune; often solving the answer before the television participants. She also enjoyed traveling with her husband Bill and friends. Phyllis especially enjoyed visiting and touring numerous Lighthouses along the East Coast of the United States. Attending Penn State football games in Happy Valley was also a favorite destination. However, Phyllis’s favorite times were spent surrounded by her children, grandchildren and greatgrandchildren. She cooked many meals for holidays and family gatherings- often making food that her loved ones enjoyed but she would not touch.

Whether known as Mom, Nan (Nanny) or Gigi, we will all miss her stories about the old days in Lancaster City and her tenacious spirit. We all take comfort that your prayers have been answered and you are once again united with your beloved Bill to continue causing the best kind of trouble.

Relatives and friends are respectfully invited to attend a Funeral Service in the Debord Snyder Funeral Home at 141 East Orange Street, Lancaster, Pa. 17602 on Saturday July 14, 2018 at 11:00 AM with the Rev. Ron Miller officiating. Friends may greet the family from 10:00 AM until the time of the service. Interment will be at the Millersville Mennonite Church Cemetery on Millersville Pike.

The family requests that in lieu of flowers that contributions be made in Phyllis Groff’s memory to Lancaster Hospice & Community Care; P.O. BOX 4125 Lancaster, PA 17604-4125.

Offer Condolence for the family of Phyllis J. Groff