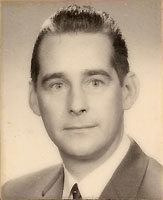 Philip G. Lafferty, 83, of Lancaster passed away Saturday, June 2nd at ManorCare Health Services. He was the husband of the late Joan Helen Lafferty. Born in Philadelphia, he was the son of the late Philip G. and Catherine McMinnimen Lafferty.

He graduated from Philadelphia West Catholic High School. He was a veteran of the United States Army and served in Korea, and later worked as a customer engineer for IBM from where he retired in 1995. Philip was a member of Sacred Heart of Jesus Catholic Church.

In his spare time he enjoyed fishing and simply being on the water, the beach, watching Notre Dame Football and spending time with his family. He was also an avid fan of all Philadelphia sports teams.
He was a proud member of the American Legion, former President of the American Order of Otters, as well as the AmVets.

Surviving are his 7 sons; Philip G., of Mount Joy, Patrick M., Andrew W., husband of Justina M., Kevin A., Joseph T. and Martin E., all of Lancaster, and Vincent D., husband of Audrey L., of Denver; 11 grandchildren, and 2 great-grandchildren. Also surviving are 2 sisters; Christine Jaskowiak and Catherine Holveack. He was predeceased by a brother John Lafferty.

A Mass of Christian Burial will take place at 11:00 A.M. Thursday, June 7th, 2012 at Sacred Heart of Jesus Catholic Church, 558 W. Walnut Street, Lancaster, PA 17603 with the Rev. Michael E. Messner as Celebrant. A viewing will take place 10:00 A.M. until the time of the service. Interment in St. Joseph New Catholic Cemetery. In lieu of flowers, contributions in his memory may be made to Sacred Heart of Jesus Catholic Church.

Offer Condolence for the family of Philip G. Lafferty