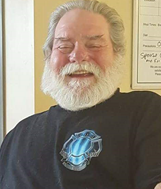 Peter D. Ondeck, 71, of Conestoga, PA, passed away peacefully on October 1st, 2019 at home with his family. He was the loving husband of Kim Walker Ondeck, whom he would have celebrated 33 years of marriage on the 25th of this month.

Born in Bronx, NY on May 17th, 1948, he was the son of Daniel and Anna Ondeck. There, he graduated from Evander Childs High School.

Most of Peter’s working career, he described himself as a Social Chemist. He worked as a bartender starting at the old Host Town (where he met his wife) and continued from there to Wickey’s, Windows of Steinman Park, and Quarter’s Lounge on Centerville Road where he stayed for 20+ years. He later worked odd jobs until his stroke in 2012.

He was a man of many interests. He enjoyed bowling, golf, and was an avid NY sports fan, following the Yankees and the Giants. As a man that was always working with his hands, he enjoyed painting, jewelry making, making personalized dream catchers, playing Powerball and scratch-off lottery tickets, playing Nintendo and later in life, his computer.

Italian at heart, the man loved his food. His favorites included Nino’s pizza of Millersville (where he always said was the closest to being “home” in NY), snacking on pistachios, Ferrero Rocher candies, dousing everything in hot sauce or crushed red pepper, and his home-cooked, family recipe meatballs.

Peter is preceded in death by both of his parents.

A drop-in memorial service will be held on Tuesday October 8th, 2019 from 3pm-7pm at the Conestoga Country Club at 1950 Stone Mill Road Lancaster, Pa 17603. Peter would want everyone to dress in what they feel most comfortable in. He always preferred his jeans and a t-shirt. Bonus points for New York sports-affiliated attire!

Offer Condolence for the family of Peter D. Ondeck