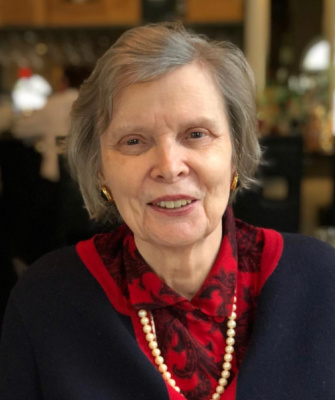 Born March 31, 1932, in Worcester, Massachusetts, Patricia worked as a Senior Guide and Specialist in American Furniture and Textiles at Winterthur Museum in Winterthur, Delaware for over 25 years.  She was an active member of the church community, The Junior League, and volunteered generously around Juvenile Diabetes.  Patricia was an elegant and gracious example of unconditional love for us all.

She was the wife of Hugh Charles Lovell, also of Worcester, Massachusetts, where both their families lived for many generations.  Patricia and Hugh were married for over 65 years and shared a wonderful and loving companionship well into their final years together at Willow Valley.  She was the loving mother of Thomas Ward Lovell, born May 17, 1955, who died at the age of 63 after a lifetime battle with Juvenile Diabetes.  Patricia is survived by her sister, Nancy Jones Pearson of Hartford, Connecticut, also by her daughter Suzanne Lovell of Chicago, Illinois, married to Richard A. Stein.  Hugh and Patricia were the proud grandparents of four grandchildren, Russell Lovell, Laura Porto, William Marble Rossiter, and Alice Lovell Lewis, and the proud great grandparents of Kaylee Elizabeth Lovell in Herndon, Virginia and Leo Alfred Porto in Tinton Falls, New Jersey, along with Eleanor Goddard Lewis of Brookline, Massachusetts and Luke Koiller Rossiter of Salt Lake City, Utah.

A service was held for Patricia on Wednesday, May 5, 2021 at the Memorial Garden of the First Presbyterian Church on Orange Street in Lancaster, Pennsylvania.

In lieu of flowers, donations may be made to City of Hope/Diabetes Research/Pasadena, California at: https://www.cityofhope.org/research

Offer Condolence for the family of Patricia Jones Lovell