You are here: Home / Obituaries / Patricia A. Landis 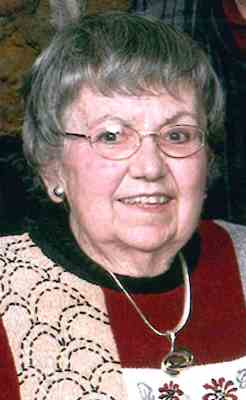 She was born in Lancaster to the late Benjamin and Mabel Erb Nolt and enjoyed 65 wonderful years of marriage to her high school sweetheart, Jay E. Landis.

Pat graduated in 1947 from East Lampeter Township High School.   She was a warm and creative homemaker plus the greatest fan of every athletic endeavor her family participated in.  She was a longtime member of Mellinger Mennonite Church participating in the Messengers of Cheer Sunday School  Class and serving on the flower committee.   She blessed many with her gift of hospitality as she and Jay opened their home to friends and acquaintances.  She also shared the abundance of her large garden with fresh produce in the summer and jars of preserves throughout the year.

Pat loved her rose gardens and raising boxer dogs.  She was also an avid crafter, sharing her passion with others by teaching craft classes. At their Pataja farm they welcomed five Fresh Air children from New York City with whom they have remained close. She was a member of the Farm Women Society #22, and served on the West Lampeter Fair Flower Committee for many years.  Pat enjoyed traveling and attending Holstein Conventions throughout the United States.

A Memorial Service will be held on Saturday September 17, 2016 at 2:00 P.M. at Mellinger Mennonite Church, 1916 Lincoln Highway East, Lancaster, PA with the Rev. Joe Miller and the Rev. Leon Oberholtzer officiating.  Visitation will be at the church on Friday evening from 6:00 P.M. until 8:00 P.M.  Interment in the adjoining church cemetery will be private.  The family will again greet friends at the church on Saturday from 1:00 P.M. until the time of the service.  In lieu of flowers, contributions in Pat’s memory may be made to the Building Fund at Mellinger Mennonite Church, 1916 Lincoln Highway East, Lancaster, PA  17602 or to The Parkinson Council, 111 Presidential Blvd, Suite 141, Bala Cynwood, PA  19004-1023

Offer Condolence for the family of Patricia A. Landis