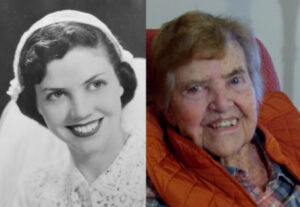 Willaline Rutter Charles, 96, passed away Saturday, January 14, 2023 in Lititz, PA. Born in Lancaster, “Billie” was the daughter of the late William P. and Miriam M. Benedict. She was the wife of Andrew G. Charles, Jr., who died in 2002. We will miss Billie’s ready smile, sense of style, and enthusiasm.

Following graduation from J.P. McCaskey High School, Billie worked as a secretary for local businesses, including Fulton Bank, Pennsylvania Retailers, and El Capitan Products, Inc. At El Capitan she met her future husband, the boss’s son, Andy, whom she married in 1950.

Billie was a Cub Scout Den Mother, volunteered in her church’s nursery, loved flower gardening, and family vacations at the beach. Once her family was grown, she enjoyed travelling with her husband; favorite trips were to Ireland and Germany. Through Andy’s Navy Reunions, the couple became friends with a German sailor who was rescued by the crew of the Destroyer Escort Andy had served on during WWII. In recent years Billie enjoyed eating out with family, watching Jeopardy, and decorating for the holidays, especially Halloween.

A memorial service will take place at a later date. In lieu of flowers, please contribute in Billie’s memory to The Humane League of Lancaster or the charity of your choice.