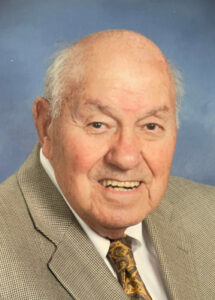 Born to the late Sarah Pfautz and Warren Eldredge Evans in Lancaster on April 8, 1930, he is predeceased by his wife of 68 years, June Louise Wohr Evans as well as a sister, Josephine Helm, and
four half siblings.

He attended the former Franklin Street Elementary School, George Washington Elementary School, Edward Hand Jr. High School. A 1948 graduate of J.P. McCaskey High School, he participated in Glee Club (where he met his future wife), served on the Social Committee (later serving for many years on the Reunion Committee), participated on the Soccer Team and played the tuba in Band. Lancaster League baseball was one of his athletic passions and he later umpired for younger teams as well. He loved watching and playing golf and enjoyed teaching and sharing the game with his eldest granddaughter. He was thrilled to attend the Masters with his half-brother in the late 80s. He was a devoted supporter of the Lancaster Garden Club’s members’ activities as well as the Herb Society of America.

His working career was dotted with long hours and hard work to support his family. From delivering early morning newspapers, to being a kiln brick setter for the Lancaster Brick Yard in his early years, to metal working with Joseph Thomas, to becoming a certified welder and later a supervisor of coating in the flooring division with the former Armstrong Cork company for 25 years.

Warren never missed a beat with his determination to get the work done, all while enjoying family entertaining, summertime grilling, and volunteering in the community. He served as a volunteer with the Consumer Protection Agency in Lancaster County, participated with Census taking, and served as Judge of Elections in Manheim Township for many years. He also was an employee of Simon Ladder Towers, Fulton Bank and Bank of Lancaster County after his retirement from Armstrong. Up until recently, he volunteered at Landis Homes with delivering daily newspapers to their residents and assisting in their mail room. He was often referred to as the “Mayor” of his neighborhood as he helped others or just caught up with his friends about recent events.